HomeFoodBan the burger! Ways to raise your barbecue game
Food

Ban the burger! Ways to raise your barbecue game 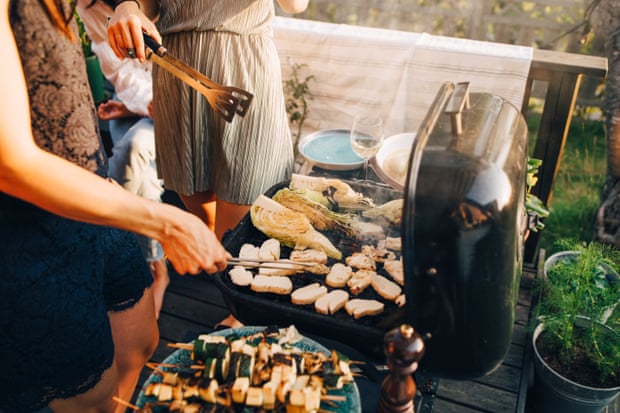 “Vegetables and fruits are the real stars of the barbecue – this is the wisdom of the Middle East,” says chef Itamar Srulovich, whose latest cookbook, written with partner Sarit Packer, is called Chasing Smoke. “Everything that hits the grills get smoky and sweeter, even cabbage.” For something “really special”, Srulovich dresses charred wedges of the humble veg with chopped shallots, chilli and garlic, all fried in butter with a big handful of dill stirred through at the end. Steve Horrell, executive chef of Roth Bar & Grill in Somerset, meanwhile, tops charred hispi cabbage with caesar dressing or aïoli, pangrattato and parmesan, then lets it “all melt together”.

But perhaps the easiest upgrade is to invest in a basic smoker, says Mursal Saiq, co-founder of Afghan barbecue outfit Cue Point in west London. You’ll impart more flavour that way: “We use oak, which works amazingly with beef and lighter meats such as chicken and pork.”

A multipurpose marinade will come in handy, too, Horrell says. “For pork, we make a sweet cider brine – a bottle of cider, a little water, cider vinegar, fennel seeds, demerara sugar, salt. Douse a herb branch in the brine, and slap the meat with it as it cooks.” Any leftover brine makes a cracking dressing, too.

“The whole process is the meal, so enjoy that,” Srulovich says. This means lighting the barbecue, putting foil-wrapped potatoes to one side of the grill, chucking on some pea and broad bean pods “to nibble on”, and lamb chops marinated in a tahini barbecue sauce (tahini, pomegranate syrup, anchovy, garlic, chilli, vinegar). Grill alongside stone fruits (also a great dessert, FYI) for “a chutney-type situation”, then serve with the potatoes cut in half and topped with sea salt (“perfect”), olive oil or butter (“more perfect”), and/or sour cream and chives (“heaven”).

Speaking of spuds, Rukmini Iyer has a stroke of genius in her latest cookbook, The Green Barbecue, mixing blanched gnocchi, chopped peppers, pesto and olive oil, then threading the lot on to skewers. You could, of course, mix things up even more, Iyer writes: “Try cherry tomatoes and halloumi or tofu, or cubes of fresh fennel and halved figs.” While afternoon pick-me-ups don’t get any better than French toast crumpets, for which Iyer whisks grated cheddar, chopped chilli and sage into an egg and yoghurt mix, drowns the crumpets in it, then grills until “just set”.

For afters, Saiq is sweet on brownies, pouring a classic batter (“delicious with caramel”) into a buttered cast-iron dish and putting in a high-heat smoker for an hour and 15 minutes. And chef Chet Sharma, whose first solo restaurant, BiBi, is set to open in central London this summer, ups the ante by infusing milk with smoke for an ice-cream base. “Put a trivet on top of a shallow bowl of milk, and a small metallic bowl on top of that.” Sharma then adds hot charcoal to the latter, along with spices (cardamom, cloves) and a spoonful of clarified butter. “It will smoke like crazy.” Cover and leave for up to 30 minutes, depending on how strong a flavour you’re after: “You can always add fresh milk to temper it.”

Alternatively, go back to basics. “The natural thing after a barbecue is watermelon or ice-cream,” Srulovich says. “Or both, actually.”