HomeOlympicsAn Olympic uniform so quintessentially upper-middle class Australian, you can wear it to the yacht club
Olympics 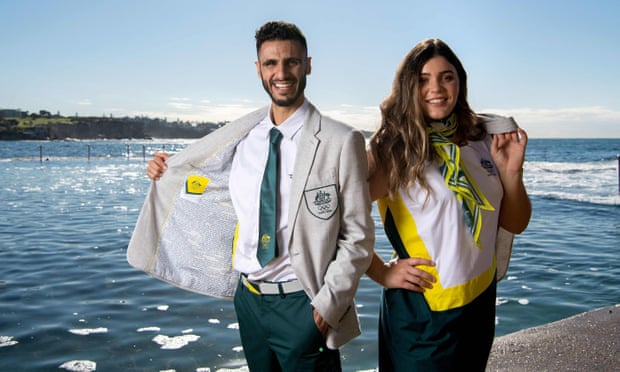 Designed by Sportscraft in collaboration with the Australian Olympic Committee, the uniforms are a green and gold sartorial tribute to our country’s sporting heritage and professional athletes past and present. As are matching white sandshoes, with green and gold details, custom-designed by Volley Australia.

Yes, despite a global pandemic and many vastly unvaccinated populations, the 2020 Olympic Games are set to commence in Tokyo, Japan in just over two months. Because you can take our lives, but you’ll never take our 400m butterfly.

This marks the eighth time Australia’s oldest fashion lifestyle brand has been tasked with dressing our Olympians, a job that must match the gravitas of representing the country on an international stage with the form, function and comfort appropriate for the heat and humidity of summer in Tokyo. I’m sure it helps that the clients are elite superhumans in peak physical condition.

Nine athletes, some Games veterans, some competing for the first time, three canoeists – which I mention because that’s a mighty high ratio of canoeists and I like the word canoeists – wore various combinations of uniform separates to showcase the ways the team members can style their look. These include a short-sleeved shirt, semi-formal shorts, a tennis-style dress, skirt, tie, scarf, belt and blazer.

Sportscraft’s design team was inspired by the vibrance and chaos of Tokyo, in particular the famous Shibuya Crossing intersection. Marrying the brightness and sharp angles of the hosting city with Australian culture and sporting history, they have created a minimalist, modern aesthetic that’s at once polished and playful. Crisp whites are complemented by rich, prestigious green and sassy, almost neon yellow.

For female athletes, or hopefully anyone who wants to wear them, the tennis-style dress and pencil skirt are clean and simple, with extra kudos to the designers for that much-coveted detail: dress pockets! The shorts are extremely now, at a just-above-the-knee length that is hard for us mere mortals to pull off, but which has dominated runways and street style for the past few seasons. And if you squint, the scarves could be Alexander McQueen skulls.

For the boys, and apparently the girls if they so choose, the pairing of a button-up shirt, blazer and tie with dress shorts and a belt is a look so quintessentially upper-middle-class to rich-as-fuck Australian they can wear it to the yacht club when they come home. I’ll let you decide if that’s a good thing.

The hero piece is definitely the blazer, in a classic neutral shade with the coat of arms and Olympic rings embroidered on the breast in dark green. While the jacket’s exterior is stark and understated, the interior contains a hidden treat for its wearer. Sewn into each blazer’s lining are the names of every Australian Olympic gold medalist since Edwin Flack won our first in 1896.

Reminiscent of Natalie Portman’s 2020 Academy Awards Dior cape, which was embroidered with the names of the women she felt were overlooked for best director nominations last year, Sportscraft’s needlework is a celebration where Portman’s was a condemnation. Personally, I’m here for all embroidery-led fashion statements.

“It’s so special to wear a jacket that has the name of every Australian Olympic champion written on the lining,” said dual Olympic medallist and one of the aforementioned canoeists, Jess Fox. “They’re on your back and I feel like they’ve got my back. All of us that get a chance to wear this jacket are carrying on the Australian legacy. It also then stokes our own dream and that desire to have our own names etched there for future Olympic generations.”

Olympic opening ceremony uniforms are unlikely to make me weep tears of fashion joy, as have Bottega Veneta sandal heels and Dries van Noten sweaters to name but two. But this isn’t a Paris runway and judging them through couture-tinted lenses is a fruitless endeavour. The simplicity and small nods to current trends in Sportscraft’s designs make for a solid overall look. I would, however, love to see future uniforms that are less blue-blood preppy and more inclusive celebration of the athletes’ and our nation’s cultural and social diversity. Go team!