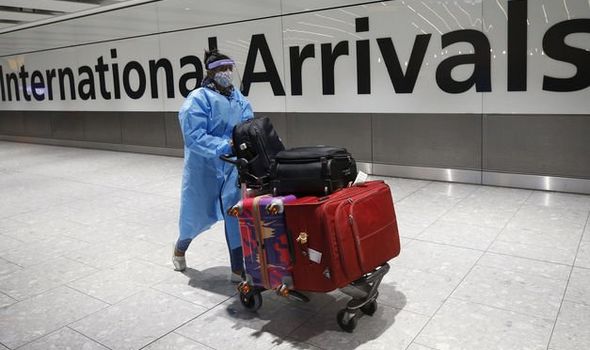 Travel rules and regulations changed yesterday, following steps set out by the Government in its Covid roadmap. Many Brits took the opportunity to travel to one of the UK’s 13 green listed nations such as Portugal, Iceland, Australia and more. But there is some confusion over the status of other countries included on the amber list.

Of the three, the amber list is the most exhaustive and includes nations on the cusp of both red or green status.

But rules surrounding travel to any of them resemble those on the red list.

Anyone, regardless of whether they’ve had a vaccination or not, “should not” travel to amber list countries, according to advice posted on Gov.uk.

The Prime Minister’s spokesman said the rules primarily applied to leisure activity, with travel for other reasons permitted.

They said: “Our advice is that no one should be travelling to amber list countries, in the interests of public health.

“There may be unavoidable, essential reasons for people to travel to amber list countries.”

But travel sites continue to sell holidays to amber-rated destinations such as Spain.

And the Government has not made it illegal for people to buy and embark on them.

Ministers have even suggested it would be okay for people to visit friends overseas.

He added: “They can travel to those countries, but they then have to observe quarantine when they return and have two tests after returning.

“So people can travel to those areas, yes, but they will then have to subject themselves to the quarantine requirements on return.”

When quizzed as to why holidays remain legal, Boris Johnson’s spokesman said amber status acts as a “default” for countries not already categorised in the red or green lists.

Brits have taken advantage of the latest rules, with roughly 150 flights scheduled for amber list countries and 30 for green nations.

However, many of those seeking travel had to wait in significant queues as thousands of people flocked to airports.