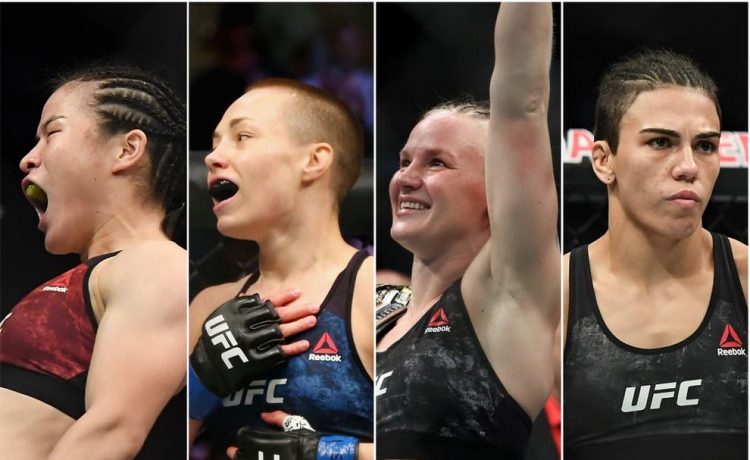 This Saturday, UFC 261 will feature three title fights, two of which will see women’s championships contested.

In the co-main event of the card, which will be held at a full-capacity Veterans Memorial Arena in Jacksonville, Florida, Weili Zhang will defend her strawweight belt against former divisional champion Rose Namajunas.

The 15,000 fans in attendance will also watch Valentina Shevchenko put her flyweight gold on the line against former strawweight titleholder Jessica Andrade.

Either of those bouts, if not both, could upstage the main-event rematch between welterweight champion Kamaru Usman and rival Jorge Masvidal. In fact, of the 31 UFC events to have been headlined by women, Shevchenko (20-3), Andrade (21-8), Namajunas (9-4) and Zhang (21-1) have collectively main-evented nine of them, with more feature bouts undoubtedly to come.

In 2013, it was Ronda Rousey and Liz Carmouche who became the first women to compete in the UFC – just two year’s after the promotion’s president Dana White said females would never fight in the Octagon – and the pair in fact headlined their own card. That bout, which Rousey won via submission, set ‘Rowdy’ on a path to become arguably the biggest star the UFC had seen at that point, regardless of gender, and it also began a new era in the company.

Sixteen women’s fights took place in 2013. Since then, more than 180 women have fought in the UFC, with 81 women’s bouts in 2020. Shevchenko, Zhang, Namajunas and Andrade have carried the baton left in the ring by Rousey since her departure from the UFC in 2016, as have Joanna Jedrzejczyk and Amanda Nunes, who is unanimously regarded as the best women’s mixed martial artist of all time.

And of the 26 women’s contests to have been awarded ‘Fight of the Night’ honours in the UFC, Zhang’s first title defence is undoubtedly the highlight – and the consensus greatest women’s bout ever.

Having recorded the fastest knockout in strawweight history (42 seconds) to dethrone Andrade in Shenzhen, China in August 2019, Zhang’s rapid rise from UFC debutant to the promotion’s first ever Chinese champion gave way to a defence against former 115lbs titleholder Jedrzejczyk.

Since losing her pro MMA debut in 2013, Zhang has won 21 straight fights and required just four in the UFC to claim the belt once worn by Jedrzejczyk, who in 2015 became Poland’s first ever UFC champion and Europe’s first female titleholder in the company. In March last year, the pair squared off in what is deemed the most outstanding women’s fight in UFC history – if not the UFC’s greatest ever fight, full stop – with Zhang winning via split decision.

Bouts like that one have helped to change people’s perceptions of what can be achieved by women in the sport, Zhang tells The Independent through an interpreter.

“Nowadays the stereotype around women training MMA seems to have decreased,” the 31-year-old says. “In older days people believed if a girl trained MMA, in the future when she grew up she wouldn’t be able to turn it into a proper occupation. But it has changed now.

“These days more kids are starting to train and I’ve seen a lot of girls come into my gym. For example, there was a nine-year-old girl competing just recently. She won her fight and her mum was being very positive, encouraging her to be a future champion – like me.”

The UFC’s reach is particularly advantageous in helping to undermine stereotypes around women, Zhang suggests, as is the company’s apparent choice to promote female athletes as a result of their skills, rather than doing so in a token attempt to exhibit equality.

“I just think the UFC is a big platform for MMA and sport,” Zhang says, “and the UFC is putting more female fighters in main events because all female athletes are becoming more skilled.

“More and more girls are starting to practise mixed martial arts, and the future will be even brighter.”

Zhang also praises Namajunas, Shevchenko and Andrade for their roles in the growth of women’s MMA, noting that their differing backgrounds have helped the sport to spread. Namajunas was born in America to Lithuanian parents, while Shevchenko was born in Kyrgyzstan to Russian parents and has Peruvian citizenship. Then there is Brazilian Andrade, who defeated Namajunas in 2019 to win the strawweight strap before losing a split decision to ‘Thug Rose’ in each woman’s last outing.

“They’ve definitely contributed a lot for females in MMA all around the world, because they all come from different parts of the world,” Zhang says. “They’re helping MMA to spread in different countries and regions.

“Mixed martial arts in China is developing very fast now,” Zhang adds, with her own contributions to that reality abundantly clear. Indeed, Zhang’s compatriot Liang Na will make her UFC debut during Saturday’s prelims as she faces Ariane Carnelossi.

Still, all eyes will be on the main card, as Zhang, Namajunas, Shevchenko and Andrade step into the Octagon on what could be another defining night for women’s MMA.