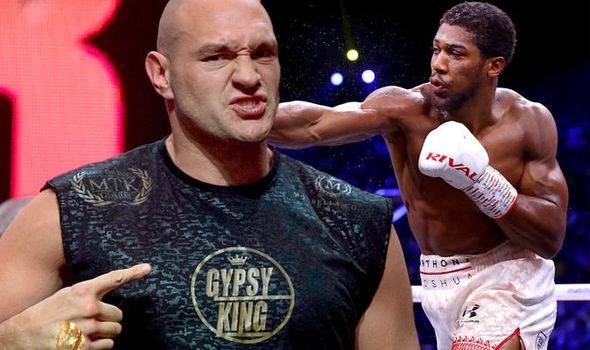 Tyson Fury has warned he will “move on” from his undisputed fight with Anthony Joshua if it is not all agreed by Tuesday. However, Fury remains confident a fight agreement will finally get concluded.

Joshua’s promoter Eddie Hearn has maintained for some time that a deal has been very close to being struck.

However, there has been no date set for the most-eagerly anticipated bout for some time.

Fury says he has received many “big offers” for his next fight.

And he claims he will look at those other offers if a match up with Joshua is not finalised by Tuesday.

Speaking to Behind The Gloves on Sunday, Fury said: “I’m waiting.

“There’s a few good offers on the table, I’ve been told, from a few different countries, which is exciting news for me.

“I’ve always been quite sceptical about it all.

“Like before, I’ve been told there’s quite a lot of big offers on the table, from a few major players, so very interested and excited to finally hear what they are and to see if they are one, feasible and two, can make it happen in whatever country wins the bid for it.

“We have to go to Monday, Tuesday by the latest. If I don’t know anything by Tuesday, I’m just going to move on, because it’s been a long time in the making.

“Now finally the offers are on the table. We’ll go through them and take the best one.”

Hearn has previously stated that a two-fight deal had been agreed, despite Fury’s camp saying it was “nowhere near” being done.

Joshua is set to put his WBA, WBO and IBF titles on the line against WBC champion Fury if all goes to plan.

And Fury is still expecting the all-British encounter to be agreed eventually.

“I think we’re going to know within the next couple of days – what, where, when.

“I’m pretty confident this fight is going to get made in the next few days, because from what I’ve heard, there are some big players involved and there’s some big offers come in from very rich people and very rich countries.

“I’m sure that they’re going to be very good offers.”