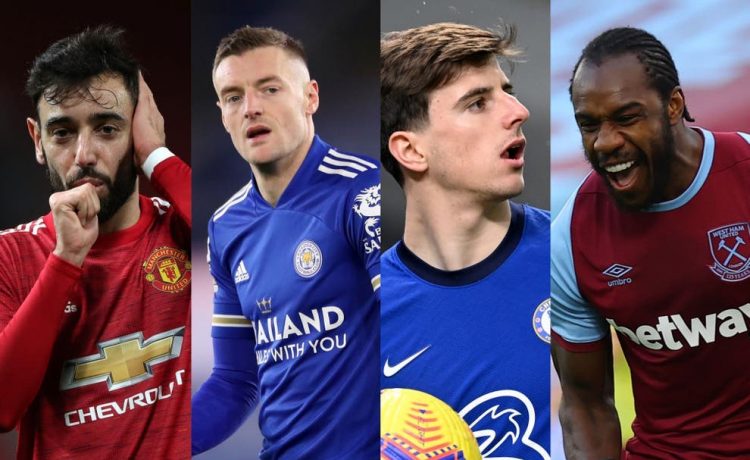 The Premier League may not have much of a title race to speak of this season but the battle to finish in the top four and earn a place in next year’s Champions League has a large field of contenders once again.

Surprise packages West Ham are also in the hunt though, while Tottenham Hotspur are still in with a chance and a resurgent Liverpool are coming up on the rails.

With around eight games left for most of those involved, The Independent has broken down the run-ins, checking the average home and away points-per-game and average expected goal difference (xGD) of their remaining opponents.

Who has the easiest run-in and who could run into trouble?

It will take an almighty collapse for Manchester United to fail to return to the Champions League next season.

Though nothing is guaranteed and they often look far from convincing, Ole Gunnar Solskjaer’s side now have been steadily, consistently picking up results and now have an 11-point lead over fifth-place.

Sunday’s narrow win over Brighton extended their unbeaten Premier League run to 10 games, while recent victories over Manchester City and West Ham practically cemented their top four status. After a tough run, their remaining fixtures are a mixed bag.

Trips to Tottenham, Leeds, Villa and Wolves await, while Liverpool and Leicester visit Old Trafford, and Fulham may still be fighting for their lives come the penultimate weekend. Solskjaer can be confident of the top four though and can set his sights on second.

Five points clear of fifth, Leicester are still in control of their own destiny.

Losing to the champions-elect at the King Power on Saturday was a setback but not an entirely surprising one and by no means fatal. This weekend’s tricky trip to West Ham is far more important.

After that, Brendan Rodgers’ side will feel confident of picking up the points they need in their next four games: West Bromwich Albion, Crystal Palace and Newcastle at home, with Southampton away in the middle.

Win those, and Leicester should be able to negotiate a difficult end to the season without much trouble. Rodgers will want to avoid a repeat of last season’s Champions League near miss as meetings with United, Chelsea and Tottenham close out the campaign.

Make no mistake: West Ham are in this race.

As other surprise contenders have fallen away, they have stayed standing. A thrilling 3-2 win away at Wolves lifted David Moyes’ side into the top four on Monday night, which is a huge credit to him and his staff.

Can they do it? Their next two home games will be crucial, with both Leicester and Chelsea visiting the London Stadium in the space of a fortnight. Beat both and suddenly a Champions League place will not merely look possible but likely.

Everton also travel to east London but the rest of West Ham’s schedule is made up by bottom-half and mid-table opponents who have little to play for, and Moyes’ men have been fairly reliable against those sorts of sides this season.

The loss of Declan Rice is a blow and Michail Antonio’s fitness is always a concern but they are genuine contenders and have nothing to fear from their run-in.

When in a tight contest to qualify for the Champions League, it is never a good idea to lose the ‘easiest’ game you have left by five goals to two.

That’s exactly what happened to Chelsea last weekend, though, and it has blown this race wide open.

Thiago Silva’s red card cannot be ignored when dissecting their heavy home defeat to near relegation certainties West Brom, but the result will still worry Thomas Tuchel after an otherwise steady, solid start to life under his management.

Chelsea have an opportunity to bounce straight back away to a Crystal Palace side with little to play for but otherwise, their schedule is arguably the most difficult of all the contenders. Trips to West Ham, City and Villa look potentially problematic.

Then there’s Leicester’s visit to Stamford Bridge on the penultimate weekend. Tuchel will hope to have a top-four spot wrapped up by then but Chelsea can ill afford a repeat of Saturday’s freak result.

Despite all the negativity and uncertainty surrounding the club, and even after throwing two points away late on at St James’ Park on Sunday, Tottenham still cannot be counted out of the race just yet.

In order to avoid a second straight season without Champions League football, Jose Mourinho’s side need to make the most of their run-in. It is not exactly straightforward but not the most challenging either.

United are up next but Southampton, Wolves and Sheffield United also visit north London. A trip to Leeds looks daunting on paper but could provide the space for Harry Kane, Son Heung-Min and Gareth Bale to thrive.

Even going to Goodison Park is not too intimidating, given Everton’s wretched home record, but Spurs’ inconsistency is the major obstacle. Will they still have a chance when Leicester visit on the final day?

Along with West Ham, the big winners of the weekend. While Leicester, Chelsea and Tottenham all dropped points, Liverpool eviscerated Arsenal at the Emirates and have started to look more like their usual selves.

If any side has the potential to mount a late surge, it is last season’s champions and even though so much has gone wrong at Anfield this season, their end-of-season schedule is the softest of all the contenders by far.

Their final six games see Newcastle, Southampton and Crystal Palace visit Anfield, while Jurgen Klopp and his players travel to West Brom and Burnley as well as Old Trafford.

Last season, they would have expected to take at least 16 points from those games.

Liverpool’s biggest issue was the amount of ground they had to make up but Chelsea’s shock defeat means fourth spot is back within touching distance again. A sustained run of wins is required and, crucially, looks possible.

Everton are only five points off fourth-place West Ham with a game in hand, but they look likely to be the next casualty in this race.

Dropping two points late on to Crystal Palace was costly for any faint Champions League ambitions that Carlo Ancelotti still harbour and extended their underwhelming form at Goodison Park this season.

Tottenham, Villa and Wolves are all set to visit Merseyside over the coming weeks too. Even Sheffield United may fancy their chances at this rate.

It has been a different story on the road – Everton are already top four if you’re looking solely at the away table – but Villa, West Ham, Arsenal and even Brighton are not particularly easy places to go. Then, on the final day, it’s the Etihad.