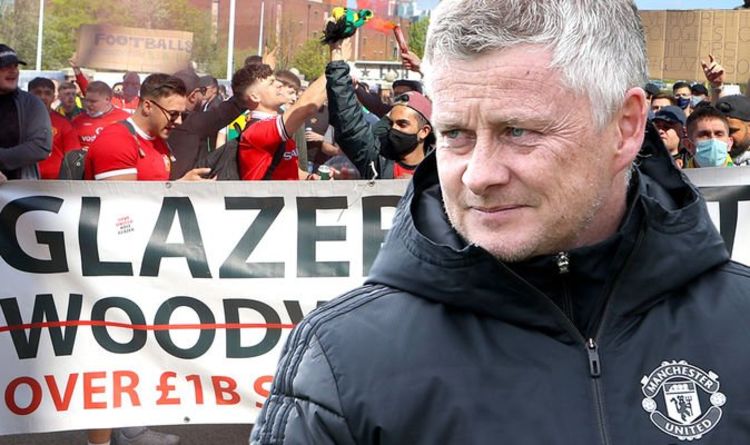 Ole Gunnar Solskjaer has called on Manchester United fans to “keep it peaceful” if they turn up to anti-Glazer protests at Old Trafford on Sunday.

Supporters groups are hopeful thousands will turn up to make their feelings known about the owners at 2pm following their botched breakaway attempt with the European Super League.

There have even been suggestions that United and Liverpool fans will come together in unison and even look to block the team busses entering the stadium.

There is expected to be an increased police presence outside the ground as United fans speak out against the failed Super League and also the club’s owners, the Glazer family.

And while Solskjaer insisted the fans have a right to be heard, he made clear his hopes that the protest will pass off without incident.

“It’s important that the fans’ views are listened to and we communicate better,” said the United boss.

“But I’m so happy all the clubs have agreed that this shouldn’t be the way of moving forward,” said the United manager.

“When the protests are on, it’s important they go in a good fashion and that we keep it peaceful.”

Solskjaer talked to a small group of anti-Glazer fans who breached security at the club’s Carrington training complex last week.

During a five-minute conversation he assured them that the current owners had the best interests of the club at heart insisting Joel Glazer “loves the club”.

Those words have cut little ice with supporters groups who plan to assemble at the ground two-and-a-half hours before the Liverpool match kicks off.

The Manchester United Supporters Trust issued a statement yesterday accusing the Glazers of riding roughshod over fans concerns about the Super League project.

“The complete lack of engagement with fans, our players and manager is a gross mishandling of club affairs and one which we cannot forgive,” said a statement.

“Joel Glazer’s subsequent apology is not accepted. We have simply had enough.”

Solskjaer insisted his players will not be distracted by the planned protest.

“They are focussed on the game and nothing else and they’ve handled difficult situations before.

“I’m not worried one second that our mind is not on the football when it happens. I think you saw here in the semi that the players are fully focused on performing.”

Woodward has assured Manchester United fans there will be no attempt to resurrect the botched European Super League project.

Speaking to a fans’ forum on Friday the outgoing vice-chairman added a personal apology for what was a bad misjudgement by the United board.

But he assured them the plans for a breakaway structure were dead in the water as far as the current ownership were concerned.

“I know you will feel angry and let down by the lack of consultation,” said Woodward.

“As Joel Glazer said last week we failed to give enough weight to the essential principles and traditions of sporting merit which are so vital to football.

“We want to restate our commitment to those traditions. I can assure you that we have learned our lesson from the events of the past week and we do not seek any revival of the Super League plans.”

Woodward announced his resignation in the aftermath of the failed project and intends to step down at the end of the year.