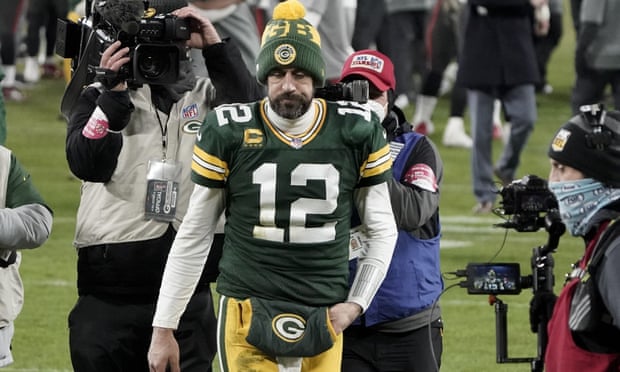 Aaron Rodgers’ relationship with his only professional team could be heading for a messy divorce amid reports that the quarterback has told some people he does not want to return to the Green Bay Packers for the 2021 season.

ESPN’s Adam Schefter, citing multiple team and league sources, says the future Hall of Famer has lost patience with the way the team is run as well as starting to look at life beyond the NFL. The Packers are understood to be concerned enough about the situation that the team’s president, general manager and head coach have flown out on separate occasions during the offseason in order to rebuild bridges with Rodgers.

“As we’ve stated since the season ended, we are committed to Aaron in 2021 and beyond,” Packers general manager Brian Gutekunst told ESPN on Thursday. “Aaron has been a vital part of our success and we look forward to competing for another championship with him leading our team.”

ESPN reports that both the San Francisco 49ers and the Los Angeles Rams have made inquiries about trading for the reigning NFL Most Valuable Player in recent months and were both rebuffed. The Rams ended up trading for Matthew Stafford, while the 49ers will almost certainly draft a quarterback in Thursday night’s draft. The news also opens the way for teams to at least consider making a play for Rodgers during the coming days of the draft. The possibility was brought up by the man he beat to this season’s MVP, Kansas City Chiefs quarterback Patrick Mahomes, who tweeted: “Well i see draft weekend is going to be pretty interesting…” shortly after the news broke.

Meanwhile, NFL.com reports that the Packers and Rodgers have been negotiating a long-term extension for weeks but that the quarterback has not come close to agreeing a deal.

Rodgers is one of the most talented quarterbacks of all time but many critics believe he has not received the support from the Packers a player of his abilities deserves. He has reached only one Super Bowl during his career, while the likes of Peyton Manning and Tom Brady have won multiple championships. Last year’s draft was particularly striking as the Packers chose to select a quarterback in the first-round rather than arm Rodgers with weapons that could help him reach another Super Bowl.

There have also been changes in the 37-year-old Rodgers’ personal life. He recently became engaged and was a guest host on Jeopardy!, and said he would one day like to present the show full-time.

Rodgers is a nine-time Pro Bowler and this year’s MVP nod was the third time he has won the award.