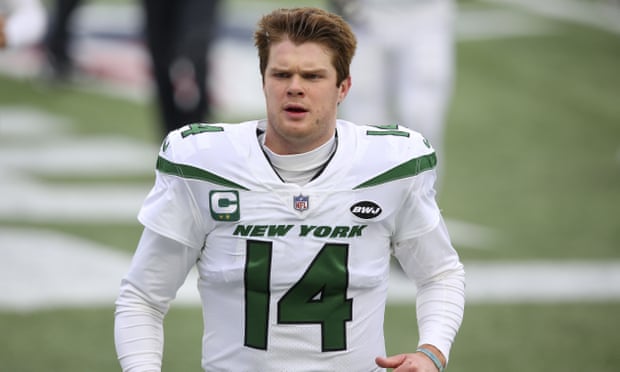 The Sam Darnold era at the New York Jets is over with news that the quarterback is being traded to the Carolina Panthers in return for a sixth-round pick in this year’s NFL draft and a second-rounder and fourth-rounder in 2022.

Darnold was seen as the future of the Jets when they selected him with the No 3 overall pick in the 2018 draft. But, while he showed glimpses of his potential, he was also wildly inconsistent during his tenure, something that was not helped by his team’s failure to build a supporting cast around him. In 2019, in his most infamous game as a professional, he was caught on microphone saying he was “seeing ghosts” against divisional rivals the New England Patriots when he was picked off four times.

The Jets own the No 2 selection in this month’s draft and are expected to pick Zach Wilson as Darnold’s replacement as Robert Saleh begins his first year as head coach.

“I want to publicly acknowledge the commitment, dedication, and professionalism Sam displayed while with the Jets. He is a tough-minded, talented football player whose NFL story has not been written yet,” Jets general manager Joe Douglas said in a statement. “While all these things are true, this move is in the short- and long-term best interests for both this team and him. We thank Sam for all of his work on behalf of this organization and wish him well as he continues his career.”

For their part, the Panthers will get a quarterback who is still only 23 with undeniable arm talent. The caveat is that Darnold is yet to demonstrate that talent on a consistent basis: he has thrown 45 touchdowns to 39 interceptions in his career and finished with the lowest passer rating of 36 qualified quarterbacks in 2020. He has also failed to stay fit and is yet to play in all 16 regular season games during his three-year career.

The Panthers have struggled to find a replacement for Cam Newton at quarterback, and Teddy Bridgewater was competent at best as their starter last season. They must decide whether to take up Darnold’s fifth-year option for 2022 by 3 May. He is due to make $4.6m this year but the Panthers would owe him $18.8m fully guaranteed in 2022.

For the Jets, it is back to the drawing board for a team that has consistently failed to draft capable quarterbacks. “I honestly think [fans] are going to look back 20 years from now and say this is the moment the Jets shifted into a new gear, that they became a great team,” Jets vice chairman Christopher Johnson said a few days after Darnold was drafted in 2018. The team will hope they make a better job in the draft this time.