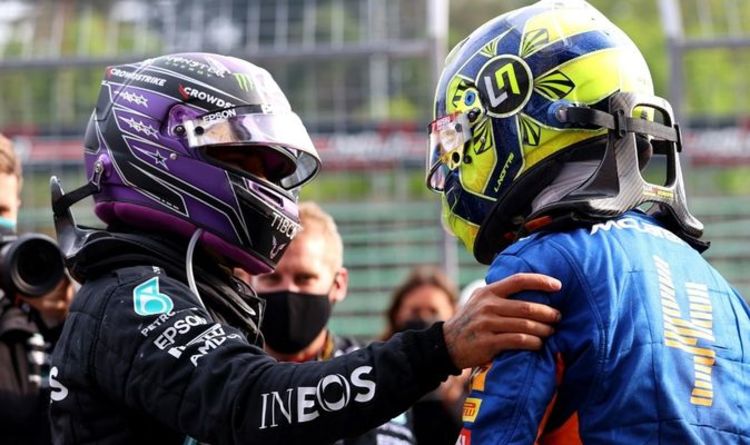 At 36 years old, with seven world titles under his belt – and with over a decade of experience in Formula 1, Lewis Hamilton has become one of the elder-drivers on the grid, whether he likes it or not.

Behind Kimi Raikkonen, 41, and Fernando Alonso, 39 – Hamilton is the third oldest driver on the grid, and after sending positive messages to both Lando Norris and George Russell, perhaps he is starting to embrace his role as a mentor to the younger generation.

Norris was left bitterly disappointed during qualifying for Emilia Romagna Grand Prix after having his best lap time deleted, a time that would’ve put him P3 on the grid, whilst Russell collided heavily with Hamilton’s team-mate Valtteri Bottas, issuing a public apology for his part in the incident.

Writing on Norris’ Instagram, Hamilton said: “Nobody can knock you for giving it your all. Amazing lap, it’s great to see you and the team shine. Move on, let’s race.”

“I think it was something that was nice to see,” explained Norris. “I guess coming from someone that has been through exactly what you’re feeling, it definitely means more than anyone who has not been through it saying such a thing.

“I guess that’s the different thing, seeing it from a driver – rather than a fan or engineers, or mechanics, or the group around you.

“But also to see it from a driver, someone who’s actually gone through that in the past few years, or his 12-15 years of F1, that kind of means a little bit more because you know that they’re speaking the truth, and they’ve gone through probably things very similar to that.

“It’s not like it changes my life, but it’s definitely a cool and a nice thing to see from driver to driver.”

Hamilton took to Instagram to send both the drivers some personal words of encouragement, after Russell issued his public apology, Hamilton wrote: “Strength comes from vulnerability. If you don’t make the mistake you can never learn the lesson. Respect for taking responsibility.”

Ahead of the Portuguese Grand Prix, the Briton hoped he could make a difference.

“You’ve got so many talented people here,” said Hamilton. “We all, I think, have a huge amount of respect for each other and we communicate better than we ever have, especially since I started in Formula One, which I’m really proud of.

“We are all human beings, we have a lot in common, we are all so focused on naturally beating each other but there’s a lot of really good people here and I think we really need to be supporting each other.

“We’re all battling and fighting against the same sort of things and it’s interesting to be further down the line and know when you look back on someone who’s quite a bit younger and see them going through something you’ve gone through a long, long time ago.

“Hopefully it’s helpful to say something positive to encourage them to keep pushing, keep their head up, keep fighting.”