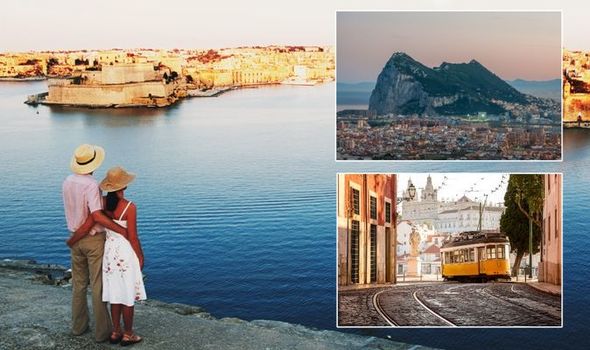 From May 17, Britons will be able to jet off internationally for leisure purposes. However, whether or not they face quarantine will depend on Prime Minister Boris Johnson‘s “traffic light” system for travel.

Though the Global Travel Taskforce has yet to unveil its official list, travel experts have been making their prediction in the lead up to the crucial May date.

Paul Charles, CEO of the PC Agency, has issued his latest update based on current COVID-19 data around the world.

Sharing his insights to Twitter, the travel expert suggested it could be bad news for the majority of Europe initially.

While three European holiday hotspots will be green, he said “pretty well all of Europe” will be categorised as Amber.

There is good news, however, for Portugal, Malta and Gibraltar who could turn green as soon as the travel ban lifts.

Mr Charles wrote: “These are our latest expectations for traffic light colour categories from May 17.

“These are based on vaccine rates, infection rates, evidence of variants and data quality.

“We are keeping pretty well all of Europe in Amber except Malta, Gibraltar and Portugal which we expect to be green.

There is some hope ahead for European holidays, though.

“We believe Europe will mostly turn green by end of June, as will the USA,” said Mr Charles.

He also highlighted some countries which are areas of concern based on the data analysed.

“We are concerned by possible India-related infection increases in Seychelles, Sri Lanka and the Maldives so these won’t be green on May 17,” the travel expert wrote.

“Cyprus is also of concern due to 100 percent infection increase in the last month. It’s number one in our chart.”

Despite travel expert predictions, the Government has remained tight-lipped on which countries it is considering for the green list.

In an address to the nation last week, the Prime Minister said: “I’d love to be able to give you a clear rundown of the countries that we think will be red, amber or green.

“We won’t be able to do that at this stage.

“As we have said the Global Travel Taskforce has reported but what they have said is that we are really going to need to wait until early May before we can say which countries are on the list.

“You can see some of the troubles and problems that some of our friends are currently having so I think it would be premature to speculate about that.

“I am sorry about that but we will be saying as much as possible as soon as we can before May 17.”