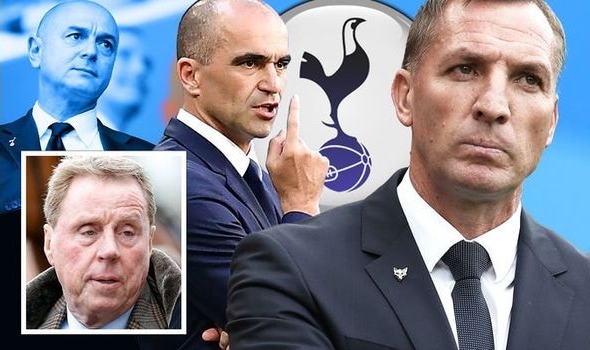 Harry Redknapp believes Daniel Levy had already sounded out the next Tottenham manager before he sacked Jose Mourinho.

And forget early bookies’ favourite Maurizio Sarri – he believes it will be Brendan Rodgers, if Spurs can persuade him to quit Leicester, or Belgium manager Roberto Martinez.

“I would think I would have more chance than Sarri,” Redknapp said. “Where would he come into it?

“Who do I see? I see Brendan Rodgers or Roberto Martinez. I think he would have a big chance. And they tried to get Brendan when I left. It is whether he wants it.”

Ryan Mason will continue his interim reign with Sunday’s Carabao Cup final against Manchester City – a match Redknapp will watch at the cinch Drive-In Final event which is showcasing the game for Spurs fans.

The 74-year-old, who led Spurs between 2008 and 2012 feels it is too soon for him to be a permanent candidate and the one thing he knows for sure is that Levy will already have his next target all but tied down.

“Tottenham have already got somebody,” he said. “They will have done a deal with somebody already. I know how they work.

“When I went, they had already spoken to two or three people. I knew that and I had heard that.

“When Mauricio Pochettino went at 9pm one evening, by 8am the next morning, Mourinho was in the training ground.

“Do you think he just came walking in, was handed a piece of paper and said, ‘Yeah, give us that, I’ll sign that”?

“You’re dealing with Jose Mourinho – those negotiations will have been going on for weeks and yet it was all in place the following morning.

“Tottenham have got somebody in place but they can’t get him there now because he is in a club or he is managing a national team.”

Leicester boss Rodgers, the former Liverpool head coach, this week looked to rule himself out of the running despite Redknapp’s prediction.

“It’s football, there is always speculation around, every job which comes up there will always be different managers speculated to go in.

“Tottenham is a fantastic club, it’s a huge club but my focus is here. I’m at a world-class training facility, the project we’re in here we still want to develop and have a lot of work to do.

“I have a great connection with the players, the board and we have plans to keep progressing.

“While I have the energy, the happiness and see that challenge continuing I’m very happy to be here. You can’t stop gossip but I don’t think about it.”

“So we’ll see in a couple of months who will be the Spurs manager.”