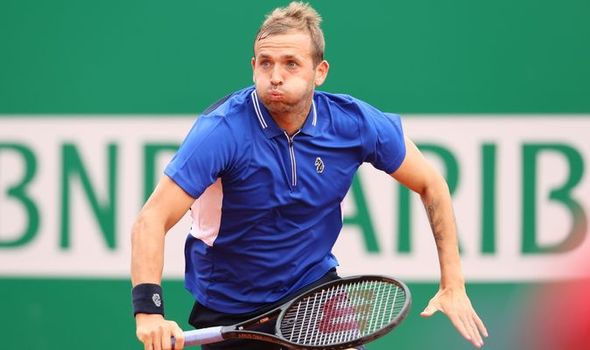 British No 1 Dan Evans has recorded the biggest shock of the Monte Carlo Masters with a stunning victory over Novak Djokovic in the round of 16. Djokovic headed into the clash with Evans looking on top form after taking his record for the start of 2021 to 10-0 for the sixth time in his career.

Jannik Sinner put up a strong battle against Djokovic in the second round, but the world No 1 ultimately sailed through with ease.

It set up a fascinating battle against Evans for the third round – the first time the two were competing against each other on the ATP Tour.

The odds looked stacked against Evans, who has admitted on several occasions that clay is his least favoured surface.

Evans’ win over Dusan Lajovic in the opening round of the Monte-Carlo Masters was his first tour-level victory on clay for four years.

Djokovic meanwhile has been a master on claycourts over the years, winning 15 titles including a French Open win in 2016.

But Evans was more than a match for Djokovic, taking an early 3-0 lead to give him some clear confidence that a surprise win was more than possible.

The Serbian tennis star broke back twice to level up the first set but Evans immediately took his chance to break for a third time before serving out for the first set.

Evans was utilising his back-hand slice to great effect, working Djokovic all over the court which forced the 18-time Grand Slam champion into making several unforced errors.

The match looked to be heading in one direction at the start of the second set though when Djokovic quickly raced to a 3-0 lead.

But Evans fought back with a wide range of shots troubling Djokovic, who began to cut a frustrated figure on the opposite side of the net after missing an opportunity for set point.

In the game immediately after, Evans broke for a second time in the set to have a chance of serving for the match.

And he made no mistake, smashing a forehand winner past Djokovic as he ran to the net.

Speaking after the match, Evans admitted that Djokovic kept him waiting in the changing rooms which helped inspire him even more.

“He kept me waiting at the start of the match in the changing rooms a little bit so it was a little annoying,” Evans said.

“I was ready to go from that so that got me a little extra fired up.”

He added: “That’s why we roll the balls out. It’s one against one and we see who wins.

“Thats what I was telling myself. He gave me some cheap ones today which he never normally does so I was a little lucky there but I’m just very happy in coming through.”

Djokovic congratulated the British tennis star, but conceded that his own performance was the worst for some time.

“Congratulations to him, he was the better player. Probably one of worst performances from my side in the last few years,” Djokovic said.

“I felt awful on the court. I should have done much better, no positives from this match. Feels bitter leaving the court like this.”