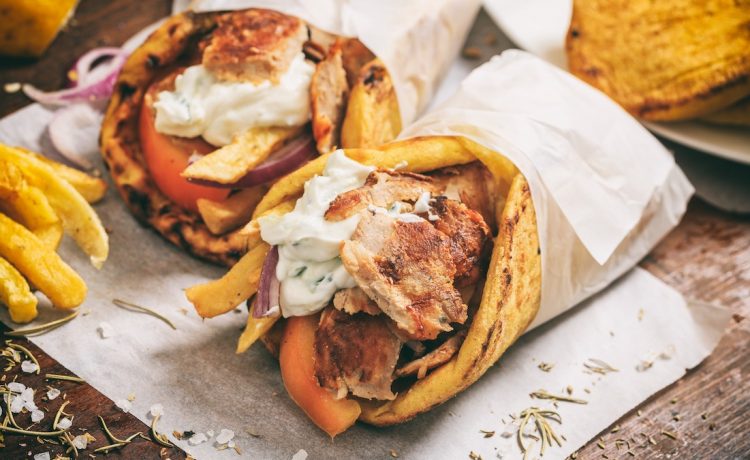 Gyros, pronounced ‘Gheero’, in Greek comes from the Greek world ‘gheereezo’, which means to turn. It gets its name from being a stacked rotating pile of thinly sliced meat, either lamb, beef, pork or chicken. The gyros as it’s currently known arrived in Greece in 1922, with hundred of thousands of Greek and Armenian refugees from Asia. Inspired by the Turkish kebab, the native Greeks made a version for their own country and heritage by using Greek meat and an abundance of local ingredients. Now, the gyros is one of the most popular fast foods out there.

How to make the ultimate chicken gyros

You will need 1kg of chicken thigh fillets, preferably boneless and skinless.

For the marinade, you will need:

For the tzatziki, you will need:

And you will need four to six pitta breads to serve the gyros.

Start by cutting the cucumber in half lengthwise, using a teaspoon to scrape the watery seeds out.

Coarsely grate the cucumber using a box grater, then wrap in paper towels or a tea towel and squeeze to remove excess liquid.

Place the cucumber in a bowl and add the remaining ingredients then mix to combine, before setting aside for at least 20 minutes to let the flavours meld.

For the salad: Simply combine all the ingredients in a bowl.

If using a frying pan, heat one tablespoon of oil over medium heat, or brush an outdoor grill with the oil instead.

Remove the chicken from the marinade, cooking for two to three minutes on each side until golden brown and fully cooked through.

Remember, though, that the cooking time depends entirely on the chicken.

Remove the chicken from the grill or frying pan onto a plate, before covering loosely with foil and allow to rest for five minutes before serving.

If your chicken thighs are large, you’ll probably need to cut them down to size.

Get a pitta bread or flatbread (preferably warmed up) and place it on a piece of baking paper or tin foil.

Place some salad down on the middle of the bread, then top up tight chicken and tzatziki.

Roll the wrap up, enclosing it with the baking paper or foil and twist the end to secure the wrap.