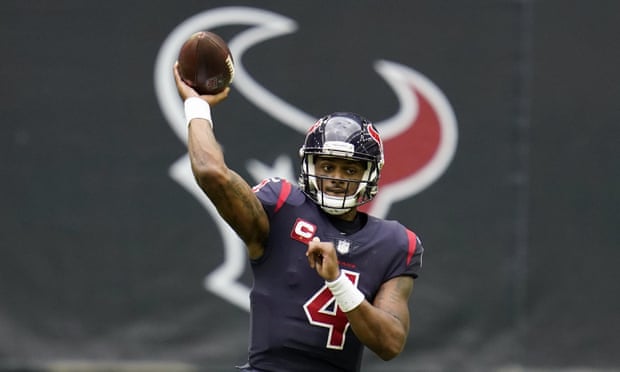 The complaint, which was filed Monday night and appeared on the Harris County district clerk’s website on Tuesday morning, describes Watson as a “serial predator” ands alleges that he “assaulted and harassed Plaintiff by exposing himself to her and touching her with his penis”.

The claims in the latest suit are similar to those in the earlier cases in which the women accuse Watson of exposing himself, touching them with his penis or kissing them against their will while he got a massage. The most recent lawsuit was filed by a woman who alleges Watson assaulted her in July 2020 in Beverly Hills, California. Six others lawsuits were filed earlier Monday while the others were filed last week.

Tuesday’s suit is only the second of the 14 to take place outside the Houston area.

Watson’s attorney, Rusty Hardin, has called the allegations “meritless”, while the NFL player has broadly denied he acted inappropriately.

The 14 women, who have sued separately, have not been identified in the lawsuits. They are represented by Houston lawyer Tony Buzbee, who’s said he planned to submit evidence from several of the women to investigators.

The NFL has said it’s investigating the allegations against Watson.

Buzbee is believed to be a neighbor of Texans owner Cal McNair. Watson and the Texans are in the middle of an acrimonious offseason with the quarterback wanting to leave a team he believes has been mismanaged for a number of years.

Watson, a three-time Pro Bowl selection, signed a four-year, $156m deal with the Texans last year. Following the trade of All-Pro wide receiver DeAndre Hopkins last spring and changes to the coaching staff and front office, Watson raised concerns about his lack of a voice in the franchise and is reportedly frustrated by the general direction of the team.