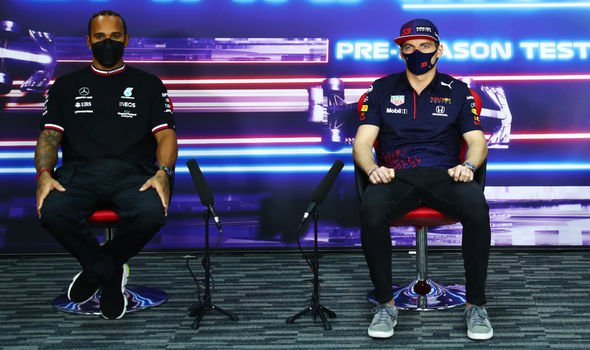 Mercedes chief James Vowles has admitted that Red Bull have an edge on them after pre-season testing as Max Verstappen looks for a strong start to the new Formula One season to prove he’s finally ready to dethrone Lewis Hamilton.

Verstappen and Red Bull were the pace-setters in Bahrain across three days of testing last week as the RB16B performed strongly In the desert.

The Dutchman’s best lap, a 1:29.960, was over a second faster than the best time managed by Hamilton as the Silver Arrows encountered troubles with their less stable W12.

Mercedes are hopeful they will be able to bridge the gap to their rivals in the coming weeks but Vowles admits Verstappen and co. may have the early advantage at the season-opening Abu Dhabi Grand Prix on March 28.

The Brixworth outfit have won the last seven straight Drivers’ and Constructors’ Championships with Hamilton seeking a fifth straight world title to move on to eight overall, which would see him overtake the great Michael Schumacher.

But Verstappen has spoken of wanting Red Bull to start strongly to put extra pressure on the reigning world champions in what could prove to be the tightest title battle in F1’s hybrid engine era.

“No-one up and down the paddock will be able to pinpoint exactly where they are, but there are a few trends that have come out,” Mercedes’ motorsport strategy director Vowles said.

“I would say Red Bull are ahead on performance, they are the class act from the test.”

Mercedes are hopeful of clawing back Red Bull across the 23-race calendar, though, and Vowles continued: “It is a test, it is not a race and it is one event out of 23. Are we going to have a close season? I would say so.

“Red Bull are a fierce adversary, they’ve got a strong package and clearly came out of the box very, very quick.

“The result of that is across the season and across different types of track layouts, I am sure you will see us move forwards and backwards relative to them.

“But I don’t believe we are going into this particularly finding all the performance that is missing or being ahead of them. So, in short: yeah, I think we are going to have a close championship this year.”

Horner declared of Red Bull’s biggest rivals: “They come into this year as absolutely the favourites.

“They’ve been so strong in the last six, seven years and it’s the same car as last year, more or less, just an updated version.

“There is a change to the technical regulations which obviously may have an effect on things but I don’t think you can read too much into their testing.

“That’s a quality team and there’s still a couple of weeks until the first race. We’ve seen Mercedes struggle a couple of years ago in pre-season testing and then they smashed us all at the first race at Melbourne.

“Yes their car looks a handful on track, but we’ve seen that change very, very quickly.”

While Verstappen said: “Definitely I think it has been the best. But it doesn’t give you any guarantees so we’ll find out through the first race weekend where we are.

“I don’t think we are the favourites. If Mercedes wins that many championships in a row, I think it’s still the same as before we came to the test.”

Hamilton felt that Mercedes would have benefitted from a longer period of testing than the three days teams were allocated ahead of the 2021 season due to the carry-over of parts from last year’s cars.

“I’ve never been a massive fan of testing; I just love racing. On the other end, it might have been good to have had more days,” the seven-time world champion said.

“It’s probably the only time I’d have ever asked for more days! We’ve got lots of work to do, it’s going to be tough.”

He added in a video for Mercedes: “It does appear we are perhaps not quick enough at the moment, but I have every faith in the team.

“We love challenges and this definitely is a challenge for us with the [rule] changes.”