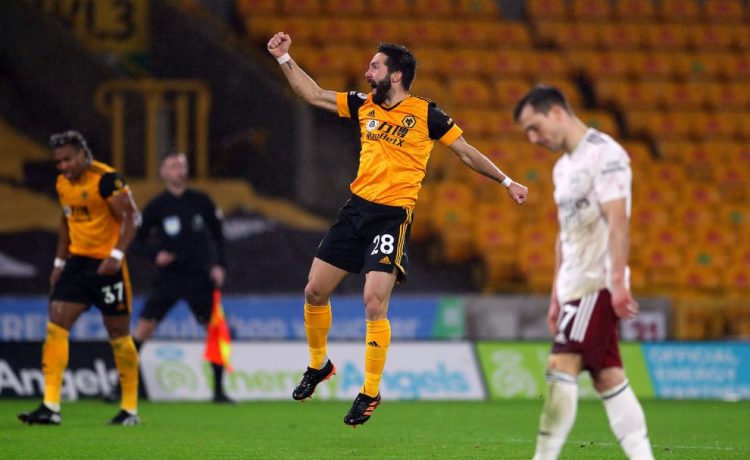 The top six beckoned for Arsenal, just as they were performing with such elan that it felt their natural home. Instead, they extended their colossal lead at the summit of another table. David Luiz and Bernd Leno collected the eighth and ninth red cards of Mikel Arteta’s relatively brief reign – no one else has more than three – and, by losing two players, Arsenal cost themselves three points.

It was them at their most self-destructive. Misfortune, misjudgements and mistakes turned dominance into defeat, excellence with 11 men to ignominy with nine. Their renaissance was such that only they and Manchester City were unbeaten in the Premier League in 2021. Wolves’ slide was such that only they and Fulham were yet to win. And so, in a case of football at its most illogical, the form book was upset, with the unwitting assistance of David Luiz and the brilliant intervention of Joao Moutinho.

For 45 minutes, Arsenal’s superiority was such that it was remarkable their lead only stretched to one goal. The had another disallowed, hit the woodwork two times and had the game’s three best players in the imperious Thomas Partey, the irrepressible Bukayo Saka and the incisive Nicolas Pepe. They were on course to beat Wolves and leapfrog Tottenham. They looked an elite team.

And they lost to the side seemingly in freefall. A game turned in a moment to illustrate the importance of Wolves’ January business. A game against Arsenal has defined their season. It was at the Emirates Stadium that Raul Jimenez fractured his skull. His belated replacement marked his home debut by winning a penalty in the rematch.

Willian Jose showed the merits of a proper centre forward, darting in behind the Arsenal defence to chase Daniel Podence’s pass. David Luiz clipped his heels. It was more clumsy than malicious, but it brought his third dismissal in Arsenal colours. Ruben Neves converted the resulting penalty.

Just as Arsenal sought to regroup after the break, sacrificing the blameless Alexandre Lacazette, experimenting with Emile Smith Rowe as a false nine, Moutinho’s screamer from 30 yards flew in off the post. A sign of Wolves’ decline earned them a first double over Arsenal since 1979. This has been a troubled season for the veteran, who has looked in decline, but a demonstration of his quality secured a highlight.

Whether Wolves inspired the turnaround is a moot point. Nuno Espirito Santo had cast his innate caution aside, starting with all four of Podence, Willian Jose, Pedro Neto and Adama Traore. The winger’s speed resulted in Leno’s dismissal, the goalkeeper leaving his box, misjudging a bouncing ball and punching it away from a chasing Traore.

It left Arsenal in disarray, but Wolves were shambolic at the start. Adding an extra attacker rendered them uncharacteristically open. Saka submitted the makeshift left-back Max Kilman to death by a thousand surges. The teenager scored a July opener at Molineux and did everything but repeat the feat. He rattled the post inside 40 seconds after latching on to Partey’s ball over the Wolves defence, drew a save from Rui Patricio in the fourth minute and defeated the goalkeeper in the ninth. Saka celebrated; VAR ruled Lacazette, who had cut the ball back to him, had been fractionally offside.

But Pepe did strike. Pierre-Emerick Aubameyang emerged from quarantine only to begin on the bench. Arteta’s decision to prefer Pepe felt meritocratic, based on his performance at Southampton last week. It was also justified. The club-record buy had a shot brilliantly tipped on to the bar by Patricio. He scored from a similar position, with a perfectly placed curler than was rendered all the better as he had nutmegged Neves and contrived to beat Nelson Semedo three times beforehand. Not since Kevin Costner had anyone danced with Wolves more. Yet by the end Pepe and Partey had been substituted, Leno and David Luiz sent off. Arsenal were playing 4-4-0 and Wolves were ending Nuno’s longest winless run.