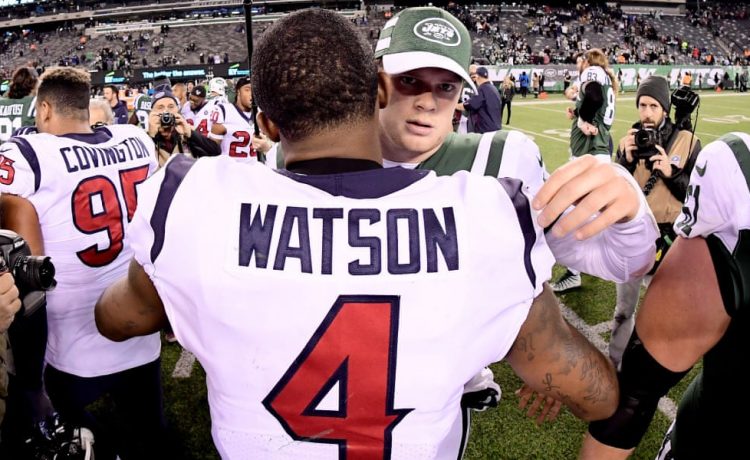 Why the Eagles could keep him: He was the runaway Most Valuable Player during the 2017 season until going down with a season-ending knee injury in a December game against the Rams. That wasn’t that long ago. Philadelphia believed in him enough to sign him to a four-year, $128m extension in July 2019. Even if they trade Wentz before his roster bonus activates on 19 March, the Eagles would take on a crippling $33.8m in dead cap hit.

Possible destinations: It looks to be a two-horse race between the Colts and the Bears. Indianapolis coach Frank Reich was the Eagles offensive coordinator during Wentz’s best season and needs a quarterback after Philip Rivers retired. Chicago are also in the QB market after making the playoffs despite a weakness at the position.

Likelihood of trade: 9/10. Both Wentz and the Eagles have given every indication they’re ready to part ways. The Colts appear to be the clubhouse leaders, but they’re less inclined to overpay than the Bears.

Why the Jets could trade him: Darnold was selected with the No 3 pick in the 2018 draft as the quarterback who was going to turn around the franchise and … he has not turned around the franchise. There is little sign he is improving (he finished 33rd out of the league’s 33 qualified quarterbacks in ESPN’s QBR rankings for the 2020 season) but he has enough raw talent that a quarterback needy team may snap him up. The Jets also have the No 2 overall selection in this year’s draft so can quickly find a replacement.

Why the Jets could keep him: Darnold is still only 23 – younger than last year’s No1 overall pick, Joe Burrow – and clearly has the talent to be a good starting quarterback. It’s also harsh to pin the blame on Darnold for the Jets’ failings since he arrived – he’s been given few weapons at receiver and his offensive line has often appeared to consist of Mekhi Becton and some guys (the now fired) Adam Gase once met in a bar. Sure, the Jets could replace Darnold with Justin Fields or Zach Wilson in the draft, but are they guaranteed to be any better?

Possible destinations: The Colts, Bears, Saints and Washington have all been linked with Darnold and the Jets have been taking calls from teams interested in a trade. One intriguing possibility is the 49ers, who may move on from Jimmy Garoppolo, opening the way for Darnold to move back to his native California.

Likelihood of trade: 6/10. There is definitely a market for Darnold out there, and the Jets have praised him while stopping short of saying he will be their starter in 2021. It may come down to whether a team offers a first-round pick for him. If that’s the case, the Jets would have three first-round picks this year and two in 2022 – strong foundations to rebuild around a new quarterback.

Why the Seahawks could trade him: The Seahawks management are reportedly unhappy that Wilson has been telling any reporter willing to listen that he is unhappy at the number of hits he has taken down the years behind the team’s consistently dodgy offensive line. He also told Dan Patrick that he was unsure whether he was available for a trade or not, hardly what you expect to hear from a franchise quarterback.

Why the Seahawks could keep him: Wilson is a wildly popular future hall of famer whose favourite pastime is helping kids out of poverty.

Possible destinations: The betting favourite for Wilson’s service is particularly tasty: the Seahawks’ NFC West rivals, the Las Vegas Raiders. Having one of the league’s quarterbacks leading the team would be a big pull when fans are finally admitted into the Raiders’ new stadium, and there have been rumours that Derek Carr is on his way out. The Cowboys, who still haven’t decided Dak Prescott’s future, are another possibility.

Likelihood of trade: 2/10. Wilson being a wildly popular future hall of famer whose favourite pastime is helping kids out of poverty.

Why the 49ers could trade him: The 49ers, mainly due to a War and Peace-length injury list in 2020, have the No 12 pick in this year’s draft. While Garoppolo is a solid quarterback, he’s more in the “won’t lose you games” category than someone whose genius will propel the Niners to the Super Bowl. He’s due to make $26.6m in 2021: would San Francisco be better off trading him, drafting a cheaper young quarterback and riding to the Super Bowl with their excellent supporting cast?

Why the 49ers could keep him: Garoppolo is often derided for being paid millions of dollars to hand off the ball to the Niners’ running backs. But a year ago, he was a quarter away from outplaying Patrick Mahomes to clinch San Francisco a Super Bowl, and – beyond Trevor Lawrence – there are no sure things among the quarterbacks in this year’s draft class.

Possible destinations: The most interesting option is a return to the New England Patriots. After Cam Newton and Tom Brady, the Pats would be able to continue their run of very handsome starting quarterbacks and Bill Belichick was a fan of Garoppolo during his time as Brady’s back-up. Newton failed to convince he is a long-term option for the Patriots last season, so Belichick may go back to a known quantity in Garoppolo.

Likelihood of trade: 4/10. General manager John Lynch and head coach Kyle Shanahan have both said they expect Garoppolo to be the starting quarterback in 2021. They also had the chance to get involved in the chase for Matthew Stafford but were content for the Rams to make a trade with the Lions.

Why the Texans could trade him: For some reason, Watson wants out of a franchise with a history of trading away stars for a pittance, making nepotistic hiring decisions, angering its players and failing to listen to the most talented quarterback in team history. That means the face of the franchise is a very unhappy one, which could make the team even more dysfunctional than it already is for years to come. Watson is a ludicrously talented quarterback, who can throw make every throw in the book and pull off stunning plays with his legs. There are teams who would be happy to part with a hefty package of draft picks for him, allowing Houston to start afresh after the disastrous Bill O’Brien era and rebuild towards competence.

Why the Texans could keep him: Watson may be unhappy, but the Texans have him under contract and are under no obligation to trade him. And why would they? He’s the best player in team history and the draft prospects they can pick up in return are just that – prospects. Once the poison of the last few months fades a little, Watson may decide he can move forward in a city where he is a hero. After all, it’s not like Houston has recent history of losing its biggest stars? Right?

Possible destinations: The Dolphins and Jets are the two teams that come up most. Both have draft capital, cap room to accommodate Watson’s salary and young quarterbacks who could either head to Houston as part of the trade or be traded themselves in order to acquire more picks to send to the Texans. Watson is reported to be open to both teams – the Dolphins have a good young core and a great coach in Brian Flores, while New York is the biggest (and most corrosive) market in US sports. Of course, Watson has power in this move too, a no-trade clause in his contract, meaning he can veto any deal if he doesn’t like the look of the team he’s heading to.

Likelihood of trade: 6/10. Tough to call. Watson wants out, but the Texans are reportedly telling interested teams that they will not trade their quarterback. Of course, they would say that if they want to get a high a price as possible for someone who could still be one of the best players in the league in another 15 years. So much depends on how much others teams are willing to pay, and how well the Texans can placate Watson. Houston don’t seem to be doing too well on the latter, firing popular backroom staff and hiring a new head coach, David Culley, who hasn’t changed Watson’s mind on his future with the team.