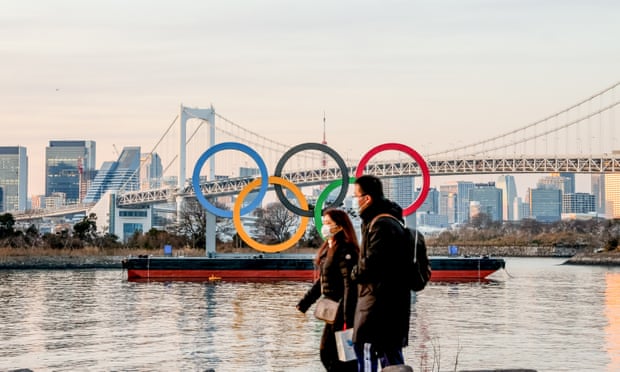 The Olympic rings have been spruced up and are once again overlooking Tokyo Bay. Countdown clocks have been reset, telling passersby there are just 171 days to go until the Tokyo 2020 Olympic Games begin.

They are supposed to build excitement in the host city and among sports fans around the world. But Japan’s Olympic dream is quickly turning sour in the face of the worst global health crisis for a century.

Almost a year after Tokyo 2020 became the first Games to be postponed in the modern Olympics’ 125-year history, officials and politicians face opposition from the Japanese public and, crucially, scepticism among athletes, sponsors and volunteers.

As the world grapples with a pandemic that has killed more than 2 million people, the official line is that the Games will open, as planned, on 23 July. This week the organisers and the International Olympic Committee (IOC) are due to release Covid “playbooks” detailing exactly how they intend to make that happen.

The Olympics have been thrust back to the predicament they faced early last spring, when the pandemic forced organisers to concede that the Tokyo Games would have to be delayed by a year.

The rescheduled event, the then Japanese prime minister Shinzo Abe said, would be a celebration of humankind’s victory over the coronavirus. But that mantra – repeated by his successor, Yoshihide Suga – is ringing hollow, with opinion polls showing that a once-enthusiastic Japanese population is now firmly opposed to Tokyo 2020. In a recent survey by the Kyodo news agency, 80% thought the Games should either be postponed or cancelled altogether.

While the human cost of the coronavirus is dramatically higher than it was at this point last year, so too are the financial stakes for the IOC and the Tokyo 2020 organisers now that they no longer have the cushion of a second delay.

As the Olympic clock ticks, officials are looking to vaccination as a potential saviour – part of a “toolbox” of measures that would ensure the Games could go ahead “safely”, Bach said, with Denmark and Israel among the countries vowing to inoculate their entire delegations.

Wary of being seen to encourage young, healthy men and women to jump the vaccine queue, however, both Bach and Japanese government officials have stated that vaccination is not a condition for competing in Tokyo.

The Australia Olympic Committee has said vaccination is “strongly recommended for the safety of athletes and the Japanese community”. Yet vaccinated people may still be able to carry and transmit the virus, and the Olympics will be held in the only major economy yet to begin an inoculation programme.

Japanese medical workers will be the first to be vaccinated from the end of February, followed by 36 million people aged 65 and over from around April. With vaccinations for Japan’s older population expected to take around three months, large sections of the host nation could still be unprotected when the Games open. When asked when the general population could expect to receive a jab, Japan’s vaccination tsar, Taro Kono, replied: “I don’t know.”

Organisers are convinced they can monitor the health and control the movements of 15,400 Olympic and Paralympic athletes in a “sanitary bubble” in Tokyo. Spectators, though, pose a much bigger problem. Ideas being floated by the IOC and organisers range from allowing full stadiums, cutting venue capacities by half and banning spectators – an approach publicly backed by Mitt Romney and Sebastian Coe, both of whom have previously organised Olympic Games – in what would be the first Olympics watched entirely on TV.

Whatever the prevailing view among politicians, some athletes and advertisers appear to be having second thoughts. Unconvinced by official assurances, Japan’s Olympic sponsors have scaled back advertising campaigns and delayed marketing events. Firms including Canon and Japan Airlines are concerned that organisers have not shared contingency plans for a cancellation.

“We’re asking ourselves, ‘Are we really going to do this?’” one unnamed sponsor told Reuters, adding that even raising the possibility of a plan B had been discouraged by organisers.

While the British Olympians Mo Farah and Adam Peaty have talked up the Games’ prospects, their Japanese counterparts are more circumspect. Of 126 athletes interviewed, in confidence, by the Asahi newspaper, 25 said they were concerned the Olympics would help spread the virus. Eighteen were worried about becoming ill themselves, and 15 attributed their blunted enthusiasm to a lack of public support.

“We have, at this moment, no reason whatsoever to believe that the Olympic Games in Tokyo will not open on 23 July,” Bach said last month. “This is why there is no plan B, and this is why we are fully committed to making these Games safe and successful.”

His words will sound familiar to more observant followers of the drama unfolding around Tokyo 2020. The last time Bach insisted there was “no plan B” was in March 2020, just days before the pandemic – and reality – finally caught up with the Olympic movement.