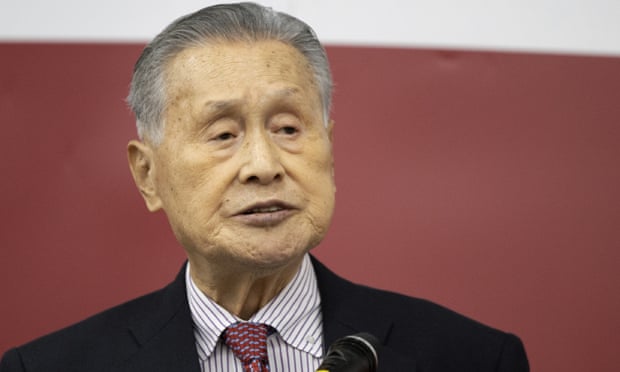 The head of the Tokyo 2020 Olympic organising committee has resigned, a week after his derogatory comments about women triggered an international backlash.

“My inappropriate remarks have caused chaos, and I would like to apologise to express my deepest apologies to the members of the council and executive board, as well as the entire community,” Yoshiro Mori, a former Japanese prime minister, told a meeting of the Tokyo 2020 executive board on Friday.

“The important thing is that the Olympic Games are held in July. If I am going to be [an obstacle] to their delivery by remaining in my position, then that is something we should avoid.

“The Games should continue under new leadership, so I’m announcing today that I’m stepping down as president of the organising committee.”

His rumoured successor, Saburō Kawabuchi, withdrew his candidacy on Friday amid criticism that he had been approached by Mori with little discussion or transparency.

Mori’s resignation – and failed attempt to install Kawabuchi as his successor – came after the Japanese prime minister, Yoshihide Suga, had reportedly suggested appointing a woman, or a younger man, only for Mori to approach Kawabuchi, the 84-year-old “mayor” of the Tokyo athletes’ village and a former chairman of the Japan Football Association.

Fuji News Network reported the government had sought to block Kawabuchi’s nomination. “We can’t give the impression that things have changed unless we install a woman or see a generational shift,” the broadcaster cited a government source as saying.

The Mori controversy had done “serious reputation damage” to the Tokyo Olympics, said one source involved in the Games. The source, requesting anonymity due to the sensitivity of the matter, said many officials wanted a woman to replace Mori.

Local media said the Olympic minister, Seiko Hashimoto, who has represented Japan at the summer and winter Olympics as a track cyclist and speed skater, was being considered as a possible candidate.

The organising committee is to set up a panel – comprising an equal number of men and women – to select a successor, Toshiro Muto, the chief executive of Tokyo 2020, told reporters. “The process has to be transparent,” he said, adding that Mori’s resignation “should not cause any delay in preparations for the Games”.

Thomas Bach, the head of the International Olympic Committee, said he “fully respects” Mori’s decision to step down and “understands his reasons for doing so”.

Bach added: “At the same time, we would like to thank him for his outstanding contribution to the organisation of the postponed Olympic and Paralympic Games Tokyo 2020 over the course of the past years.

“Among his many accomplishments, President Mori helped to make Tokyo the best-ever-prepared Olympic city. The IOC will continue working hand-in-hand with his successor to deliver safe and secure Olympic Games Tokyo 2020 in 2021.”

Andrew Parsons, the president of the International Paralympic Committee, said he hoped something good would come out of the controversy.

“I sincerely hope that the domestic and international reaction over the last seven days can be harnessed so that society places greater emphasis on diversity and inclusion, not just in terms of gender representation, but race, sexuality, and persons with disabilities,” he said.

“This world is a wonderful and diverse place and it is important we embrace inclusion to get the best out of each and every one of us to benefit society as a whole.”

Mori came under pressure to resign after he complained during a meeting of the Japanese Olympic Committee early this month that talkative women tended to make meetings “drag on too long”.

Referring to his time as chairman of the Japan Rugby Football Union, the 83-year-old said: “Women have a strong sense of rivalry. If one raises her hand to speak, all the others feel the need to speak, too. Everyone ends up saying something.”

He later apologised and retracted the remarks – conceding that they had been “inappropriate” – but the fallout only intensified, frustrating attempts by the Tokyo 2020 organisers and the International Olympic Committee to convince the world it would be possible to hold the Games during the coronavirus pandemic.

Tokyo 2020 and IOC officials have insisted that the Games, which were postponed by a year due to the pandemic, will open on 23 July, despite strong opposition among the Japanese public and concern among health experts that the event could spark a fresh outbreak of the virus in Japan.

Earlier this month, organisers published the first of a series of “playbooks“ for athletes, officials and journalists outlining a host of measures they say will ensure the Olympics and Paralympics can go ahead safely. These include regular testing for athletes, a ban on eating out and sight-seeing, and dedicated transport to ferry competitors between their accommodation and sports venues.

Mori, who has a history of making insensitive and controversial remarks, defended his treatment of women in the Olympic movement.

“I didn’t mean for [my remarks] to be neglectful of women but I guess it was broadcasted in that way,” he said. “I actually worked a lot to allow women to be able to ‘voice out’, even more than men.

“There were times when the women were not speaking out but I had appointed a couple of women so I could give them an environment and an opportunity to state whatever it was they wanted to say.”