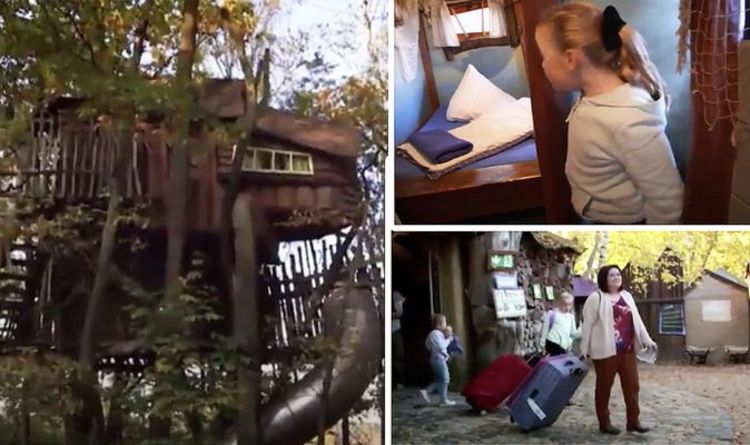 Rich Holiday Poor Holiday sees poor families get to enjoy a luxurious beak they could never otherwise afford. However, in the latest Sunday episode of the Channel 5 show, viewers were shocked by ‘rich’ holiday the poor family was given. In the showing, single mum-of-three Nadine Newman swapped her family’s yearly trip to a caravan park in Cromer, Norfolk, with that of self-made South Yorkshire multi-millionaires Gail and Matt Waterman.

This rich couple have two sons and normally head to Dubai or Mexico for blowout holidays.

Despite this, the Newman clan were not flown to a destination anywhere near as exotic

Instead, Nadine, her mum and her two daughters headed to Germany.

There they enjoyed an adventure holiday and stayed in a tree house.

Viewers took to Twitter to share their shock that such a rustic dwelling was all they got despite the luxury foreign jollies the Watermans normally take.

One Twitter user wrote: “So rich family tells us how they holiday in Cancun … and for rich holiday the poor family get sent to a tree house in Germany.

Another wrote: “A tree house, are they taking the p***? That’s not luxury.”

“The rich holiday is a tree house … get to f***. I’d set the treehouse on fire and demand to be sent to Cancun!” a third tweeted.

“Being fobbed off with a tree house … nah mate, sling it!”

Another posted: “So I thought it was about experiencing each other’s holidays, clearly didn’t happen in this episode!!”

One person wondered whether Covid-related travel restrictions were the reason behind the Germany holiday.

“Wonder if virus restrictions didn’t allow for Cancun holiday or if there were other restrictions,” one person tweeted.

“Possibly due to Covid restrictions they couldn’t travel to Mexico,” another agreed.

“Dubai obv too expensive for the stingy producers to pay for. But I agree they deffo was short changed on that swap

The Watermans were sent on a budget to a caravan park in Cromer, but some Twitter users argued that was the superior break.

“I’m watching #richholidaypoorholiday and I would genuinely much rather stay in a caravan in Norfolk than that tree top thing!” one person posted.

“At least they had fish and chips on the beach.

“No seaside holiday is complete without fish and chips one day of the week,” another said.

Previous episodes of Rich Holiday Poor Holiday saw life on a farm in Shropshire versus sailing the Adriatic coast, a Zimbabwe safari versus an Isle of Wight B&B and a Devon caravan versus a Morrocan villa.