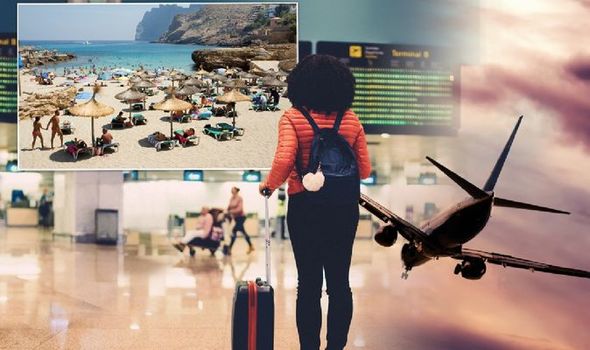 The outlook for international holidays has been bleak in recent days, with Secretary of State for Transport Grant Shapps reminds Britons they are “illegal” under the current lockdown. However, travel expert Paul Charles has suggested the travel corridors fo 2020 could return by “spring”.

CEO of the PC Agency, Mr Charles, tracks coronavirus cases in Europe on a weekly basis.

Following a drop in rates per 100,000 of the population in the last week, Mr Charles took to Twitter with his positive predictions for holidays.

“Good to see rates coming down a little in #Portugal and #Spain. #Greece #Turkey and #Croatia holding steady in the amber zone.

“I predict travel corridors will return in spring.”

Spain, Portugal, Greece, Turkey and Croatia were all popular holiday destinations last summer when they held their travel corridor status.

Currently, Spain and Portugal remain in the “red zone” for cases, however, have seen figures decline.

In the last seven days cumulative, Spain has seen 354.8 confirmed cases per 100,000 of the population.

By comparison, the UK, which also remains in the “red zone”, recorded 214 confirmed cases.

Things are looking slightly better in Greece, Turkey and Croatia, all of which sit in the amber zone.

In Greece, the number of confirmed cases over the last seven days per 100,000 of the population sits at 65.2.

However, Mr Charles’ prediction serves as a vast contrast to messages from Health Secretary Matt Hancock who has said if and when overseas holidays will return remains “uncertain”.

Furthermore, new rules are set to come into force on February 15, which would see arrivals from “high risks” countries required to quarantine in Government approved hotels.

Among the 33 “high risk” nations is Portugal, despite its drop in Covid cases.

Mr Hancock warned restrictions could last well into the future, should the vaccine be found not to protect against overseas variants.

“The first task is to vaccinate the population, and if we get good news on the vaccination impact on hospitalisations and deaths to form people who have new mutations then we will be in a better place.”

He continued: “If we do not get such news then we will have to use the updated vaccines to protect against the variants of concern.”

An updated booster vaccine would not be anticipated until the Autumn months, much like the annual flu vaccine.