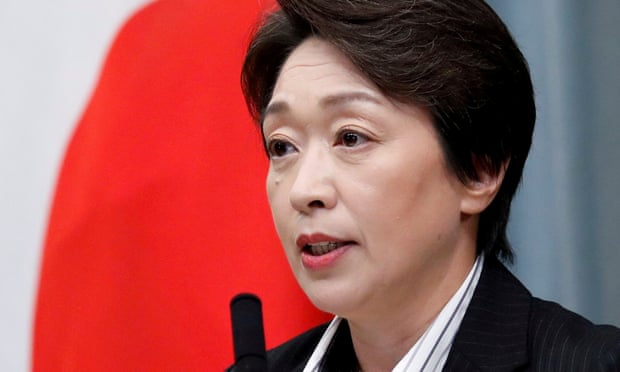 Seiko Hashimoto, the new head of the Tokyo 2020 Olympics organising committee, has said she understands there is “great public concern” over hosting the delayed Games during the coronavirus pandemic.

Speaking after her appointment just under five months before the Tokyo Games are due to open, the former Olympic track cyclist and speed skater said addressing the coronavirus threat was the most important task she faced, and she vowed to hold a “safe and secure” Games.

“Now I’m here to return what I owe as an athlete,” Hashimoto, who had been serving as Olympics minister, told the organising committee’s executive board. “As I’m taking on such a grave responsibility … I feel I need to brace myself.”

Days after her predecessor, Yoshiro Mori, resigned after making derogatory remarks about women, Hashimoto addressed media questions about an incident in 2014 when a magazine ran photographs of her making apparently unwanted advances towards a figure skater, Daisuke Takahashi, during a party after the Winter Olympics in Sochi.

“Both then and now, I deeply regret my behaviour,” she said.

Hashimoto denied any wrongdoing at the time, claiming she had simply shown Takahashi the same affection she would other athletes, who often “hug and kiss each other very naturally”. But she added: “If this invited misunderstanding from other people, I regret it and think I should be careful.”

Takahashi did not lodge a formal complaint and did not think he had been a victim of sexual harassment, his agent said at the time.

The Japanese tennis player Naomi Osaka welcomed Hashimoto’s appointment. “I feel like it’s really good because you’re pushing forward, barriers are being broken down, especially for females,” Osaka said after her semi-final victory over Serena Williams at the Australian Open. “We’ve had to fight for so many things just to be equal. Even a lot of things still aren’t equal.”

A panel formed by the organising committee reportedly agreed on Hashimoto’s appointment – one of only a few prominent female politicians in Japan – after a frantic round of meetings held to search for someone to draw a line under the Mori sexism row and address a host of problems threatening the event.

Organisers had said the new Tokyo 2020 president should meet several criteria, including a deep understanding of gender equality and diversity and an ability to promote those values during the Games.

Hashimoto, who said she would address the gender imbalance on the organising committee, will remain as an MP but will be replaced as Olympics minister by Tamayo Marukawa, a fellow Liberal Democratic party lawmaker who held the post for a year from 2016.

Hashimoto said the prime minister, Yoshihide Suga, had welcomed her decision to organise a Games that would be “welcomed by the people”.

But her first task will be to address strong opposition to the Tokyo Games among the Japanese public and growing doubts about the wisdom of holding the event during the pandemic.

Thomas Bach, the president of the International Olympic Committee, offered Hashimoto his “heartfelt congratulations”, describing her as “the perfect choice for this position. She will ensure that the focus in the final months of preparation remains on the athletes’ experience while planning all the necessary Covid-19 countermeasures”.

Bach added: “With the appointment of a woman as president, the Tokyo 2020 organising committee is also sending a very important signal with regard to gender equality.”

Born in Hokkaido, in Japan’s far north, days before Tokyo hosted the 1964 summer Games, Hashimoto took part in four winter Olympics as a speed skater, winning a bronze medal at the 1992 Games in Albertville, and in three summer Olympics as a track cyclist.

The first character in her given name, Seiko, comes from seika – Olympic flame in Japanese.

Mori, 83, was forced to step down after saying that women made meetings “drag on” because they “talked too much”. He initially refused to resign and then attempted to appoint his own successor, Saburo Kawabuchi, a former head of the Japan Football Association.

Organisers and the International Olympic Committee had only just released the first of a series of “playbooks” on coronavirus prevention measures for tens of thousands of athletes, sponsors, journalists and officials expected in Tokyo when Mori’s comments, and the global backlash that followed, dominated the headlines.

Hashimoto’s appointment comes at a delicate time for the 2020 Games. Aabout 80% of the Japanese public say the event – the first to be postponed in the modern Olympics’ 124-year history – should either be cancelled or delayed again.

Tatsuya Maruyama, the governor of Shimane prefecture, said on Wednesday that it was considering withdrawing from the torch relay, due to begin late next month, owing to concern over the spread of coronavirus.

“Should the present conditions continue, I think holding the Olympics should be avoided,” he said. “But given this situation where those who were meant to create an environment where we could safely enjoy the Olympics have not done what they need to do … I can’t help but say that it would be hard for Shimane to contribute to the hosting of the Olympic torch relay.”

About 10,000 runners are expected to carry the torch through Japan’s 47 prefectures, passing through 859 locations over 121 days before the opening ceremony at Tokyo’s national stadium on 23 July.

On Thursday, a Reuters poll showed that nearly two-thirds of Japanese firms opposed holding the Games as planned, in another sign that anti-Olympic sentiment is hardening in the host nation. It found that 36% of companies wanted a second postponement and 29% wanted cancellation. The remaining 35% wanted the Games to go ahead.

Asked how much impact the Games could have on the Japanese economy, 88% of the firms said they expected to feel either limited or very little effect, and only 5% expected a significant boost.

“If the Olympics can wait another year, we could then see vaccines become widely available,” an electric machinery maker manager said in the survey. A transport company manager wrote: “No one wants it to be held forcibly now.”

Japan only began its Covid-19 vaccine rollout this week, and large sections of the population will not have been inoculated by the time the Games open.