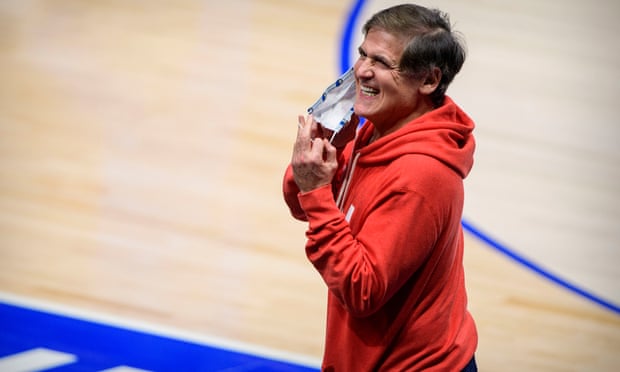 One day after the Dallas Mavericks owner Mark Cuban said he had decided not to play the national anthem before the team’s home games, the NBA says The Star-Spangled Banner must still be honoured.

“With NBA teams now in the process of welcoming fans back into their arenas, all teams will play the national anthem in keeping with longstanding league policy,” the league said in a statement on Wednesday.

Cuban responded by saying the team will go back to playing the anthem.

“We respect and always have respected the passion people have for the anthem and our country. But we also loudly hear the voices of those who feel that the anthem does not represent them. We feel that their voices need to be respected and heard, because they have not been,” he said in a statement.

“Going forward, our hope is that people will take the same passion they have for this issue and apply the same amount of energy to listen to those who feel differently from them. Only then we can move forward and have courageous conversations that move this country forward and find what unites us.”

The Mavericks are allowing 1,500 vaccinated essential workers to attend games for free, and other teams have allowed fans back into arenas in a limited capacity. On Tuesday, Cuban said he had made the decision not to play the national anthem after a discussion with NBA commissioner Adam Silver. He said the Mavericks’ new policy had been in place since the start of the season. He did not explain why he had chosen to stop playing the anthem.

Cuban was outspoken against critics of NBA players and coaches kneeling during The Star-Spangled Banner when the 2019-20 season resumed in the bubble in Florida last summer, confirming comments he had made earlier that summer to ESPN.

“If they were taking a knee and they were being respectful, I’d be proud of them. Hopefully I’d join them,” Cuban told ESPN’s Outside The Lines in June. In July he tweeted that: “The National Anthem Police in this country are out of control.”

The pregame national anthem is a staple of American sports at both the professional and collegiate level, but is far less commonplace at pro sporting events in other countries.