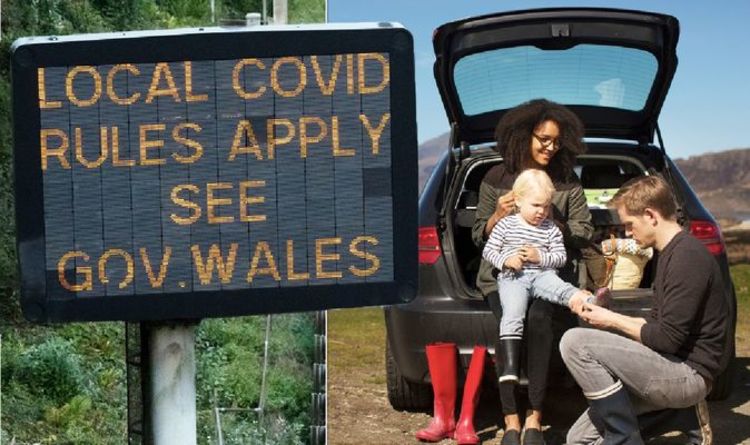 Staycations are likely to see another successful year as many Britons swap their traditional overseas holiday for a trip here in the UK. Though it is not yet clear when UK travel will be given the green light by Prime Minister Boris Johnson, one travel expert has predicted it could be as soon as April.

However, in an Instagram live Q&A, Simon Calder has suggested there could be strict rules regarding where in the UK certain people can travel.

Mr Calder suggests when the UK does begin to open up, the devolved governments of Scotland and Wales may implement their own rules on crossing the border from England.

He said: “UK holidays [will be] absolutely fine.

“Quite possible UK nations will have their own restrictions in place and I expect England and Northern Ireland will be fairly open.

“Scotland and Wales may say, at least for a time, you can go on holiday but only if you live here. That would seem quite likely.”

Although the Government has not confirmed any dates for UK travel to resume, Secretary of State for Health Matt Hancock has suggested we will enjoy a “happy and free Great British summertime”.

Mr Calder previously said he is “confident” domestic holidays will begin by April but added “ we may go back to tiers.

“We may go back to tiers but my view is that the hospitalisations and number of deaths, which are the most important issues, will be so low right across everything the political issue of stopping people in [travelling the UK] in April will be tricky,” he said.

Already many holiday parks and campsites across the UK have set out preliminary reopening dates around this time.

Some holiday providers are even hopeful they will be able to reopen before April.

Butlins, for example, has set out an initial reopening date of March 14.

Center Parcs, meanwhile, is aiming to open from March 7, and Pontins has said it hopes to welcome guests back at the end of March.

However, he said this is largely dependant on what Prime Minister Boris Johnson says when he sets out is “roadmap” to ending lockdown on February 22.

“We are optimistic for a strong summer 2021 season, should the vaccination roll-out continue and restrictions begin to ease,” said Bassett.

“Ideally we’d like to see an out-of-lockdown roadmap from the Government that will help customers plan their travels with certainty.”

Of course, whether or not the devolved nations will follow the same plan as England is not yet known.

On the issue of holidays, Scotland’s First Minister Nichola Sturgeon said: “We are likely to advise against booking Easter holidays, either overseas or within Scotland, as it is highly unlikely that we will have been able to fully open hotels or self-catering accommodation by then.

“However, for the summer, while it is still highly unlikely that overseas holidays will be possible or advisable, staycations might be – but this will depend on the data nearer the time.”

Meanwhile, Welsh First Minister Mark Drakeford said: “We’ve got Easter at the beginning of April this year, it’s always a very important moment for our tourism and hospitality industry.

“We’re talking with them about what might be possible around the Easter period, but it’s all very much caveated that the current progress that’s being made can continue and that in a careful and cautious way we look to reopen things.”