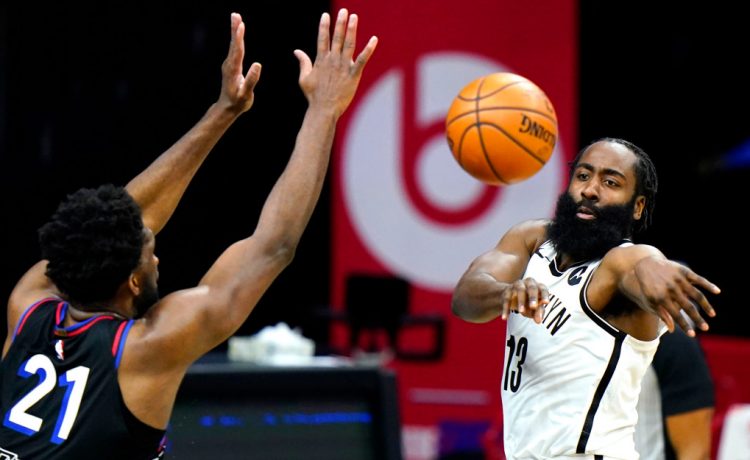 The Nets had been unbeaten against the NBA’s other perceived contenders. That is until Saturday, when they got beaten and battered in Philadelphia.

After a third-quarter collapse, the Nets’ undefeated mark against the league’s top teams went by the wayside in a 124-108 loss to the Eastern Conference-leading 76ers at Wells Fargo Center.

Locked in a 79-all tie with 5:15 left in the third, the Nets unraveled. They shot just 3-for-9 with five turnovers the rest of the quarter as the Sixers closed the period on a 23-7 run. The Nets never challenged in the fourth.

Whether it was playing sans Kevin Durant and Kyrie Irving, the Sixers turning up the defensive pressure or simply running out of gas, the result was ugly.

“It was a little bit of everything: Our positioning, our spacing, they picked it up a little bit; and then just us being careless as a unit as a group,” James Harden said after the Nets fell to 14-11. “We can’t give up 43 points in a quarter. For the most part we did a pretty good job. First quarter was a little bit too much, second quarter, fourth quarter we played well. Third quarter, we just gave them the game.”

Granted, this 76ers starting lineup is undefeated, while the Nets’ lineup was decimated. Durant was starting a seven-day contact tracing quarantine, and Irving was out with a right index finger sprain. They were sorely missed.

“We were a little undermanned,” coach Steve Nash said. “I thought our guys got a little tired from the load they were carrying and they were able to use their depth and talent to find a little separation. But I was proud of the way the guys competed.”

James Harden had 26 points, 10 assists and eight rebounds, but got precious little support. Landry Shamet showed signs of breaking out of his funk with 22 points, but it was hardly enough to overcome Embiid, who had a game-high 33 points to go with nine rebounds, and the Nets’ own abysmal disarray in the third.

The Nets had been a league-best 7-2 against teams with winning records. Against the five teams ahead of them in the standings (the Jazz, Lakers, Clippers, 76ers and Bucks), they came in a perfect 4-0 — until their third-quarter implosion.

The Nets trailed 79-78 with just over five minutes left in the third when Danny Green (11 points) got whistled for a technical, handing Harden a game-tying free throw. But after Green got angry, he then got open and helped make the Nets pay for their defensive disorganization.

The Nets allowed 14 unanswered points in a 3¹/₂-minute drought, shooting 0-for-4 with three turnovers.