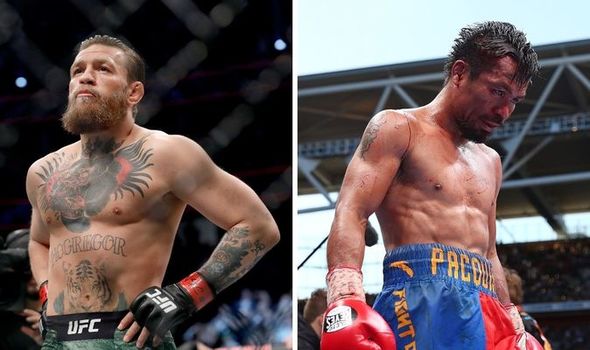 UFC star Conor McGregor‘s immediate plans appear to be in tatters following his shock defeat at the hands of Dustin Poirier last month. The Irishman was widely expected to claim victory in his first fight for more than a year, but was knocked out inside two rounds in emphatic fashion with Poirier well and truly ripping up the script.

McGregor failed to deal with his opponent’s debilitating leg kicks in the opening stages of the bout, before succumbing to a flurry of unanswered blows before the end of the second round.

The event was tipped by many to act as the precursor to a monumental rematch between McGregor and retired lightweight champion Khabib Nurmagomedov, or even pave the way for the Dublin-born fighter to face Manny Pacquiao in a return to boxing.

The Filipino veteran had previously announced his intention to face McGregor in the ring, a move that was reciprocated by the 32-year-old during the build-up to UFC 257.

Although his defeat to Poirier has all but eliminated any hopes of another chance against Khabib, McGregor could still face Pacquiao in the four-sided ring, according to World Boxing News.

The report claims that Paradigm Sports, the management company that represents both fighters, could resurrect plans to engineer a crossover bout despite the unfavourable result last month.

Paradigm released a Twitter statement on Sunday claiming that Pacquiao will fight in ‘early 2021’, with further details set to be announced in the near future.

It remains to be seen whether the eight-division world champion will face McGregor or a different opponent.

Ryan Garcia is another name to have been mentioned in recent weeks, with the American boxer claiming via Instagram last month that a fight with Pacquiao is in the works.

However, the rumours were promptly shot down by Golden Boy Promotions executive Eric Gomez, who represents Garcia, potentially opening the door for McGregor to face Pacquiao.

Reflecting on McGregor’s defeat last month, Pacquiao criticised the Irishman for not taking Poirier seriously after his victory in their original clash in 2014.

McGregor sealed an impressive win by way of knockout inside the first three minutes in a performance that could not have been more different to the one on display at UFC 257.

“Losing is part of the game, in sport there are winners and losers, that’s all,” Pacquiao explained after the fight.

“It is not about defeat, but about how you accept defeat in your life: how you get over that difficult time in your life.

“McGregor had already beaten his rival before and I think that made him underestimate him.”

He has only won once since moving from featherweight to lightweight, claiming his sole victory against Eddie Alvarez in 2016.