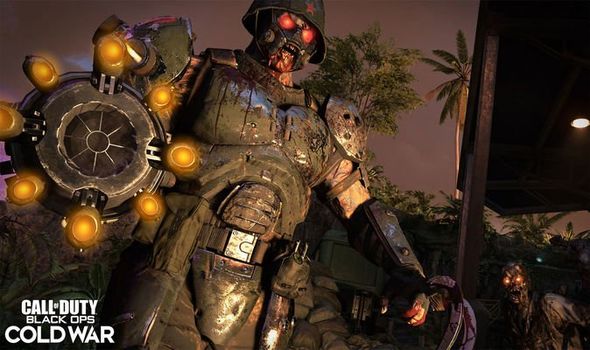 The new Call of Duty Black Ops Cold War Zombies map is available to play now with a group of four players, and Firebase Z is very different from Die Maschine.

While the previous Cold War map featured a deserted Nazi base, with glowing green fellas causing you problems before a sweaty final encounter, Firebase Z has a different pace.

More of a sprawling map with plenty of places to run through, Firebase Z Easter eggs are layered throughout and peppered with defensive events.

The full Firebase Z Easter egg quest has only just been released, but gamers are finding out about all the things that can prove helpful along the way.

One of these is the Coffin Dance Easter egg, which returns on the Firebase Z map.

Those who complete it get to explore a locked area of the map, as well as earning a special calling card and grabbing a free perk.

There are other items hidden in the Coffin, although the one thing missing are the dancing zombies.

To trigger the Firebase Z Coffin Dance, Cold War gamers will need to jump through a few hoops.

The first stage is to turn the power on across the map, which is probably the easiest bit.

Not only does the game guide you through the process but it also shows you where the Pack-A-Punch Machine.

This is an essential piece of kit if you want to take on the main Easter egg quest available in Firebase Z.

After turning on the power in Firebase Z, your squad will want to head back to the Village when they are ready to unlock the Coffin Dance.

The best place is to walk up the stairs found to the right of the Punch Machine, turn left and then turn left again when you come to a corridor blocked by a screen door and other junk.

You will then need to shoot down the corridor to hit a Toy Rabbit, which will propel you to a new location via the Dark Aether.

This place looks to be some kind of dark beach or cave, and it’s also filled with Zombies and Mimics.

When you enter this new location you will need to track down three purple-glowing rabbits, which are pretty easy to spot when not focusing on the big horde chasing you.

After finding and shooting all of these Rabbits you will be rewarded with a Legendary Loot Crate, much like with the Coffin Dance.

This will include a free Juggernogg Perk and a number of other items that will spawn randomly.

And having completed this step you and your team will be sent back through the Dark Aether and back to The Village.

This is another optional quest you can complete and is not needed to complete the main Firebase Z Easter egg.

However, it’s well worth doing at least once as you get a bunch of loot, perhaps some useful Salvage and you save money by not having to spend anything on Jugg.

You also get to a secret location not reachable via the rest of Firebase Z, which is another reason to visit.

And as mentioned above, it also unlocks that special calling card that you can add to your collection.

This is a helpful step towards tackling the full Call of Duty Firebase Z Easter egg and is a nice alternative if you don’t have the energy or the time to tack on that big Cold War challenge.