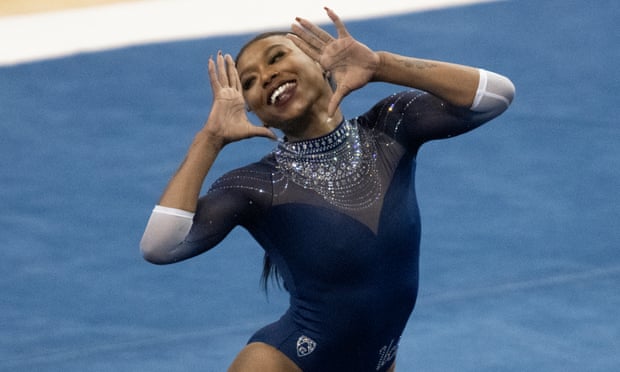 The latest entry in the surprisingly robust YouTube subgenre of viral college gymnastics routines dropped over the weekend, flooding timelines everywhere and generating national media attention rare for the parochial sport. The footage of UCLA senior Nia Dennis tumbling and swaying in a shimmering blue leotard to a high-energy mashup of Kendrick Lamar, Beyoncé, Missy Elliott, Megan Thee Stallion, Soulja Boy and Tupac Shakur from Saturday’s dual meet against Arizona State was instantly hailed as a tribute to Black Excellence, racking up more than 10 million views on in a matter of days while earning shout-outs from Michelle Obama, Janet Jackson, Kerry Washington and Ms Supa Dupa Fly herself.

The two-minute clip is not the first collegiate floor routine to bubble up into the mainstream. It’s not even Dennis’s first: the Ohio native’s Homecoming-themed floor exercise from a meet last season has been watched more than 30 million times and landed her on Ellen in March. And it’s not a coincidence that so many of them have come under the cultivation of UCLA’s longtime coach Valorie Kondos Field, the former classical dancer who in the three decades until her recent retirement transformed the Bruins into one of America’s most decorated programs.

Whenever one of these crowd-pleasing performances backed by popular music breaks through – whether it was Louisiana State’s Lloimincia Hall in 2014, UCLA’s Sophina DeJesus in 2016 or Katelyn Ohashi two years ago – there’s an overwhelmingly common question among a public that mostly only watches gymnastics once every four (or five) years: Why you don’t see routines like these at the Olympics?

College gymnastics, which operates under different and more accessible rules than what you see in the Olympics, is a step down from the elite circuit, but the fewer difficulty requirements leave gymnasts more time (and stamina) for choreography and showmanship. The gulf between the two classes has only become more pronounced since Simone Biles came along and raised the bar for everyone: these days every single thing an Olympic gymnast does on the floor has to add difficulty. It’s almost a different sport altogether.

There’s also a less restrained, more team-oriented culture in NCAA gymnastics that permits the athletes to express themselves more. Where Olympians are more prone to safer musical choices, at times verging on Muzak, that go for a more timeless feel and won’t distract from their skills, this freedom of expression on the college level allows the gymnasts to curate performances that are unmistakably bound to the cultural moment and, increasingly over the last decade, reverse-engineered and fine-tuned for maximum viral impact. “The Black Lives Matter protests were pretty much the foundation,” Dennis told Washington Post publication The Lily, adding that she wanted the routine to “be a celebration of everything [black people] can do, everything we can overcome”.

“Every single song is a major black artist, musician, from different time periods. They had a huge impact on black culture, which has also had a huge impact on me. So I’m just literally celebrating what they’ve done and having the time of my life,” the 21-year-old added.

The secret sauce, and why these routines will continue to connect with people even if the skills aren’t according-to-Hoyle “elite”, is the unbridled exuberance on display. Not only in the figure of Dennis herself, but in the delirious reactions of her teammates watching from the sidelines and hanging on every step and maneuver. For a sport where the Olympic narrative is too often one of monastic hard work, sacrifice and individualism, the college level offers a welcome reminder that gymnastics is fun.

Ohashi, a one-time prodigy who had been earmarked for Olympic stardom as a 14-year-old junior gymnast before injuries and burnout intervened, is a classic example of someone who rediscovered the joy of enjoying the sport on her own terms and thrived on college level, becoming a national sensation. Dennis, a former US national team member whose own dreams of competing in Rio were undone by an achilles injury, is following the same path. And she’s doing it her way.

“It’s been a struggle trying to find myself as a black woman in America, for real,” Dennis told The Lily. “I was constantly told I wasn’t good enough, and I’d be trying to change to fit into the ideal image of what everybody else wanted me to be. Then I came to UCLA, a place where I can celebrate Black Excellence, celebrate me. I can’t imagine any other place where I could be me, the way I am here.”