HomeLeaguesThis couldn’t have been worse for the Knicks
Leagues

This couldn’t have been worse for the Knicks 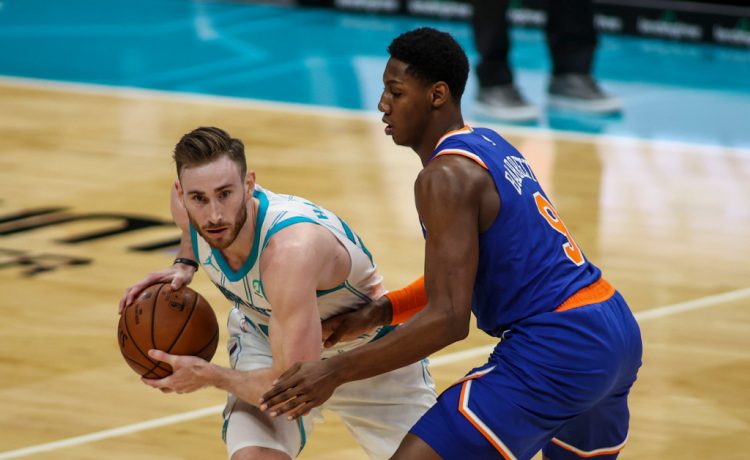 This one felt worse than the others. The Knicks became a losing team again on an all-bad-news Monday night in Charlotte.

Their third straight loss featured the Hornets’ Gordon Hayward, whom the Knicks new regime did not want to overpay in November, get payback with a 28-point first half on the way to 34.

With RJ Barrett still looking like a mess and Julius Randle finally looking like he’s running on empty, the Knicks fell to 5-6 after a dreadful 109-88 rout at Spectrum Center.

The Knicks didn’t get lucky enough to move up into the top three for Ball, but maybe they’ll have the lottery gods shine on them for Oklahoma State’s Cade Cunningham. Yeah, the errant-shooting Knicks have truly resembled a lottery team since Friday.

“We’re going through a little stretch right now,’’ Austin Rivers said. “We’ve got to be better. I know this is going to make us better. There’s a lot I can say.’’

But Rivers will keep it private. With Knick scoring outputs of 89, 89, and 88 in their last three games, it’s not the best time to host their high-scoring Brooklyn rivals Wednesday at the Garden. Not a good time at all.

There was so much hope at 5-3 and now so much despair. The fear is 5-3 will represent the season’s high point.

The Hayward haymaker was symbolic of the franchise’s woes. Hayward played as if insulted the Knicks didn’t think he was worth the Hornets’ 4-year, $120 million deal, though he was polite afterward.

The Knicks were in the hunt, Thibodeau and Hayward confirmed.

“The Knicks were definitely interested,’’ Hayward said. “I love their coaching staff and the culture they are building there. They also have some really good young players. Certainly coach Thibodeau is established and knows how to win. He’s a great coach. I also have Coach Johnny Bryant — who was my guy in Utah — who’s there as well. Certainly there was a lot of interest on both sides.’’

It’s common knowledge the Knicks were outbid for Hayward and were left with $18 million in cap space. The thinking was to save for the starry 2021 free-agent class that is losing its stars. Oops.

“We looked at all the free agents, so we’ll just leave it at that,’’ Thibodeau said before the Hayward offensive outburst. “But we know how talented he is. We had him rated pretty high on our board. There were a number of guys who we thought would fit us. It didn’t work out this time. And we’ll see how it works out in the future.”

This was always going to be a bittersweet night for president Leon Rose as his Knicks faced the league’s newest supreme playmaker coming off his historic triple-double. Ball was the apple of Rose’s eye but the lottery gods didn’t cooperate.

Toppin, the Knicks’ lottery pick at No. 8, is out indefinitely with a calf strain — gone since the season opener. Quickley is amidst a massive four-game slump. The former Kentucky guard was 1 of 10 — 0 for 6 from 3. In the past four games, he’s shooting 2 for 24.

As Hayward is amid an All-Star rebirth, Barrett continued a shocking display of ineptitude as an outside shooter. He was 0 for 5 from 3-point range, including an airball, extending his horrid streak to 2 of 21. That’s at least better than the early-season dry spell of 21 straight bricked 3-pointers.

Barrett’s been so bad, even MSG Network’s analyst Wally Szczerbiak is losing confidence in his deep shooting. The always positive “Wally World” said Barrett has to stop shooting them and drive. And Walt Frazier, when Mike Breen wondered if it’s a matter of time, Clyde said, “That remains to be seen.”

If you can combine Kevin Knox’s 3-point shooting (he nailed five) with the rest of Barrett’s stout game, you’d have one heckuva high-lottery pick.

Randle finally showed the first signs he’s exhausted from marathon minutes (second in the NBA). After playing at LeBron-like levels, this was a terrible outing complete with a frustrated technical foul late in the game, pushing Bismack Biyombo after receiving a hard foul.

Randle, averaging 23 points, scored just 11 points on 2 of 9 shooting and committed four turnovers — three of them egregious. One pass looked like it was thrown to South Carolina.

After the wildly high delivery sailed out bounds, Randle surprisingly reprimanded Knox for not moving over to be in better position. Knox would’ve had to be the height of 7-foot-5 Tacko Fall to reach it.

“I’m happy and excited I’m here in Charlotte, but they’re a great franchise with great coaching,’’ Hayward said of the Knicks. “You’ll see them keep getting better.”

We’re not so sure anymore.