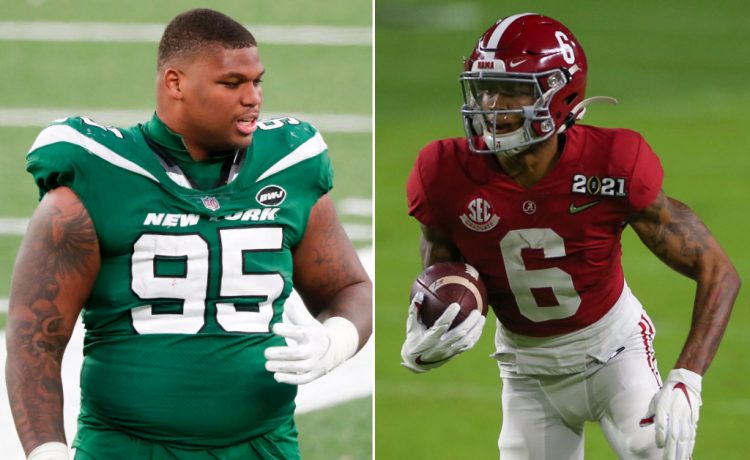 Joe Douglas is facing a huge and difficult decision on what to do with the No. 2 pick in the 2021 draft.

If Quinnen Williams was the Jets’ general manager, it might not be so difficult: Draft Alabama wide receiver DeVonta Smith.

Williams, a fellow Alabama product, may be a tad biased, but Smith has certainly put himself in the conversation near the top of the 2021 NFL Draft. After capping off a dominant regular season by winning the Heisman Trophy, Smith racked up 12 catches for 215 yards and three touchdowns in the first half of the national championship game.

He dislocated his finger and missed the second half of the game, but Smith still played a huge role in the Crimson Tide winning it all, piling up 117 catches for 1,856 yards and 23 touchdowns during his senior season.

“DeVonta Smith got that ‘Bama in him,” Williams said. “We need someone with that. Man, he’s amazing.”

The choice may not be as easy for Douglas, who must decide whether to keep Sam Darnold as the Jets quarterback and possibly trade down to collect more picks, or draft his successor in Ohio State’s Justin Fields or BYU’s Zach Wilson.

New head coach Robert Saleh is also expected to have a say in the decision, but Williams believes giving Darnold a weapon like Smith could be a game-changer.

“If we get him, he’s going to be a dynamic attribute for Sam,” Williams said.

If the Jets ultimately trade down, they may miss their chance to draft Smith, with the Dolphins looming at No. 3 as a logical suitor. Even if they stay at No. 2 and decide to build around Darnold, they could draft an offensive tackle like Oregon’s Penei Sewell.
But Williams insists that whoever lands Smith will reap the rewards.