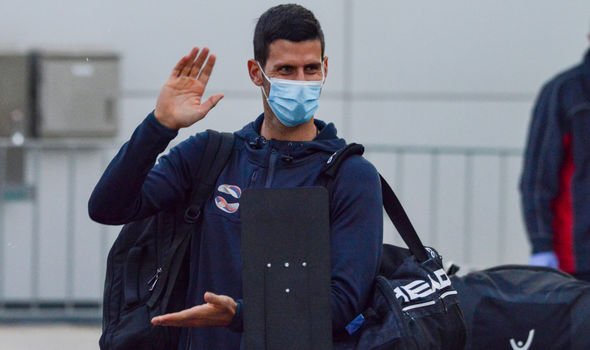 Novak Djokovic‘s reported Australian Open demands are a “selfish” attempt to gain popularity from his peers after setting up the Professional Tennis Players’ Association (PTPA) last year, says former Australian player Sam Groth. World No 1 Djokovic is said to have written to the boss of the Grand Slam, Craig Tiley, to request several changes to the strict pre-tournament quarantine rules.

It is alleged that defending Australian Open champion Djokovic requested several major changes including having the time spent in isolation reduced from 14 days.

Djokovic also wanted permission for players to see coaches and for them to be given private housing with available practice facilities.

A total of 72 players are currently in strict isolation ahead of the two-week major, which begins February 8 in Melbourne, after five positive tests were returned from the charter flights that brought players and coaches, as well as officials and the media, into Australia last week.

They cannot leave their hotel rooms even to practice for a two-week period with some resorting to standing their mattresses up against the door of their rooms to hit balls against.

Djokovic, Rafael Nadal and Dominic Thiem are all in Adelaide, along with Ashleigh Barty, Simona Halep, Serena Williams and Naomi Osaka.

While the rest of the participating players from the ATP and WTP Tours are in Melbourne, including all of those in the strict quarantine, with the rest allowed out of their rooms for five hours a day to practice and go to the gym.

But Groth believes Serbian Djokovic is out to win over some of his colleagues, having set up a brand new player association last year away from the ATP Player Council.

Djokovic was head of the ATP Player Council but quit from the elections to rejoin with it thought his PTPA role would provide a conflict of interest.

“Is he serious? It’s a selfish political move to gain popularity,” Groth wrote for The Herald Sun.

“To suggest players should have shorter quarantine isn’t only ridiculous, it’s insulting to Australians that have had to endure it.

“What did he think would happen? That (Victoria’s Premier) Dan Andrews would say ‘sure Novak anything you want’? Spare me.”

Victorian Premier Dan Andrews meanwhile said: “People are free to provide lists of demands, but the answer is no.

“You’ve got other players, who I think on social media and in other forums have made it clear that they were clear on the rules, and I probably can’t be any plainer than that.”

Tennis Australia CEO Tiley has made it clear he still expects the tournament go ahead as planned despite the COVID-19 scares.

He said: “I totally understand the emotion the players are going through right now as well as their objection to the situation.

“The determination of who was and who wasn’t a close contact was going to be entirely up to the health department, and they’re doing what they deem is necessary in order to keep our community safe.

“Obviously what has changed over the last several weeks is the new UK strain, which is more infectious, and there’s obviously a great desire by all of us to make sure that doesn’t come into our community.

“These conditions, they are constantly changing, but there’s always a risk.

“It is unfortunate that we’re in an environment now where we’ve got to manage it.”