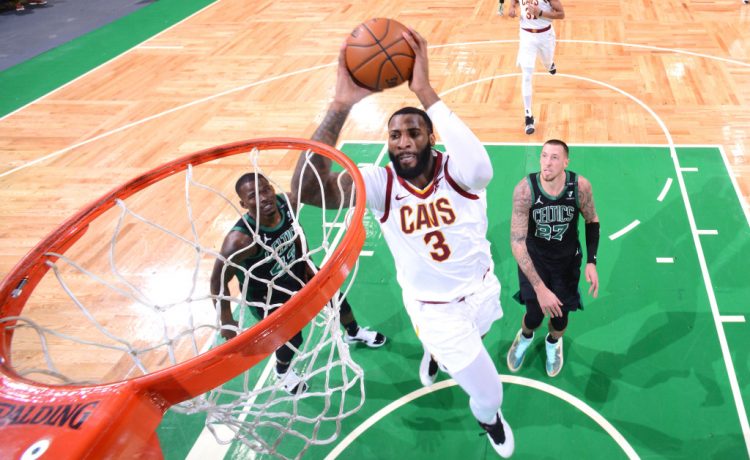 Belief around the NBA is increasing that Andre Drummond could get bought out in Cleveland. And if he does, he could be the perfect fit for the center-starved Nets.

After The Post reported that Nets general manager Sean Marks was likely to keep one of his two exceptions in his back pocket to be aggressive in the buyout market, The Ringer stated the Nets were “hoping” that Drummond gets bought out. Now on Wednesday, The Athletic claims that eventuality is merely “a matter of time.”

While coach Steve Nash has stated he wants his Nets to look inward first to shore up their inability to guard the paint, he admitted before Wednesday’s game in Atlanta that it’s a weakness they have to fix and he’d gladly welcome any outside help or midseason defensive additions.

The 6-foot-10, 279-pound Drummond would be an above-average defender at a spot where the Nets are currently a sieve.

“I think every coach in the league would be willing or be open to roster-improving,” Nash said without ever mentioning any targets by name. “But the reality is you have to work with what you have, and we have a lot of really good options. So our profile isn’t defensive, so to speak. That is a weakness for us.

“We’ve got to try find a way to overcome that, in part at least, and grow our offense, where we’re really strong, into something exceptional. It’s one of those things where you can’t hope and wish that a bunch of defenders are going to fall in your lap. You have to build and do the best you can with the profile of players we have, and also be exceptional offensively, which I think we can get to. But that’s something that’s going to take time as well.”

Calling it a weakness isn’t hyperbole — if anything, it’s an understatement.

When the Nets brought in James Harden, they shipped Jarrett Allen to Cleveland in the same four-team deal. With the Cavs facing an abundance of extra bigs — Drummond, JaVale McGee and power forward Kevin Love — the Nets have been linked to all three.

It’s easy to see why. The loss of Allen created a hole at center that needs to be filled in, their Defensive Rating — 11th before the deal — falling to 25th since.

“Defensively we need to cover up some of the holes with our lack of size and lack of depth,” Nash said. “But that’s the trade-off when you get a player with historic numbers and talent like James. We love having him on our team; it’s just the beginning of something that can grow into something great.”

That will mean getting at least a backup for DeAndre Jordan (like McGee, or incoming Norvel Pelle), or better yet an upgrade. While Jordan can still screen, rebound and catch lobs, Drummond is more mobile, can run the floor and defend.

Drummond is not only a UConn alum and Mount Vernon product, but won FIBA gold alongside Harden and Kyrie Irving. Most of all, he would have a legitimate shot at a ring teaming up with them and Kevin Durant.

Granted, a buyout is no guarantee. The play-in will keep more teams engaged, the Cavs entering Wednesday just 8-9 but still seventh in the East. But with their glut of bigs, Drummond’s trade market is tepid despite averaging 18.7 points, 14.6 boards — second in the NBA — and 1.1 blocks.

Drummond is making $27.75 million in the final year of his contract, a tall ask for any team to deal for. But if he gets bought out, the Nets have until April 9 to sign him and have him be eligible for the playoffs. They could use either the $5.7 million Disabled Player Exception they got last Friday for Spencer Dinwiddie, or the $5.6 million Taxpayers Mid-Level Exception they held onto in free agency.

Still, whomever Marks targets or however he gets him, Nash claims he’s not involved.

“No, that’s up to the front office,” Nash said. “I’m here if they want to pick my brain or ask my opinion. But I’m focused on the team we have and working with them every day to get better.”