HomeSoccer‘Morally wrong’ or the right thing to do? The questions facing football as they play on through coronavirus
Soccer 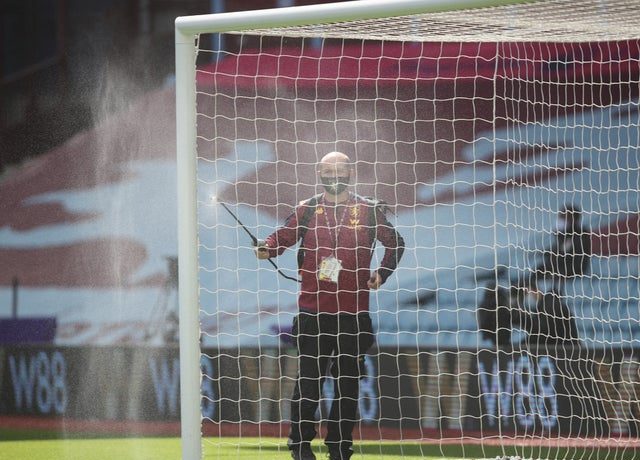 Early on Monday morning, a false rumour spread around Whitehall that elite sport was about to lose its Covid exemption, which naturally saw a lot of questions put to senior figures in football. The answer from all was the same. “Not yet.”

That conditional reflected a greater tension between the game and the government, as well as a lot of disquiet about developments and headlines from within football. Some ministers have been left incredulous by stories of players breaching protocol, as well as scenes of celebration from the FA Cup. This was not what the exemption for elite sport was supposed to allow.

There are at – the very minimum – murmurs that continuation could become harder to justify, to go with some of the growing public debate about the situation. Steve Bruce set a tone last week when stating “morally, for me, it’s probably wrong” to keep playing.

On those same lines, there is the basic question of whether it’s “ethically right” that sport continues when there are over 1,000 deaths a day.

It isn’t impossible that football could talk itself, or drive itself, into another suspension. Much of the discussion actually greatly mirrors that which took place before Project Restart, albeit with cases higher than ever before rather than falling, as was the case in the early summer.

Aside from a suspension obviously presenting huge problems for the game, it would be immensely frustrating for those involved, because they have strong confidence that the protocols work and the running of the game is safe.

A series of sources insist that a wealth of scientific evidence – from studies on the nature of transmission to tracing – indicates the players are not catching it from playing or training.

The bottom line for those in the game is that the actual staging of the sport isn’t contributing to the current health crisis. It is why they say – with some justification – that the safety of elite football is entirely separate to the dreadful wider situation, and that any decisions should be solely based on the rational evidence rather than the understandably emotional reaction to the high numbers. There is a feeling the calls to stop are just from some figures automatically believing it is “right thing to do”, instead of being based on any scientific guidance.

Others would caution that the new situation genuinely is different, and it is difficult to extrapolate evidence from low/medium prevalence of positive cases to the current high prevalence.

That, to be fair, is why the situation is under constant review.

Bodies like the Premier League would also point to how the percentage of positive cases has fallen the further we get from Christmas, as had been expected. The argument through that has constantly been that positive tests came from outside the game during a period when there is naturally more mixing, and from the wider loosening of regulations throughout December.

Monday’s figures were 36 from 2,593 tests across two rounds, representing 1.38%, which is down from the previous week’s 1.74% – 40 from 2,295. Premier League sources would also reference the example from Manchester City, as an indication of how well the protocols work. After a series of cases that left many fearing an outbreak, those at the club with positive tests were isolated, the situation was contained, and they were able to play.

Along the same lines, the crisis many feared would come from the FA Cup testing never transpired. There were far fewer positives and postponements than had been anticipated. The English Football League is similarly generally confident they can get a better handle on their situation, now regular testing has finally been introduced.

All of this has of course been put to government, who currently want elite sport to continue. They realise its value on a number of levels, particularly now so many people are confined to their homes again. The Premier League may finally become the great distraction it was heralded as but was never quite required to be in the summer, because restrictions loosened.

One minority view running alongside this concerns worries over public compliance, and the argument that suspending sport would emphasise the seriousness of the wider situation and make more people realise how bad it is. That could just as easily have the opposite effect, though, and the government is aware a difficult balance has to be struck. Professor Chris Whitty aired this very view on Monday afternoon.

The feeling for the moment is that staging elite sport has more societal positives – pun unintended. That just makes it all the more crucial that there are no more stories like players gathering in each other’s houses or breaching protocols.

The government have strongly stressed that to football’s authorities, who have in turn strongly stressed it to their clubs. The task now is to make players understand. “The entire operation could be undone by the stupidity of some footballers,” one source said.

It is why the Premier League has made it well known that if clubs don’t strongly sanction players for breaching protocols, the competition will take it into their own hands.

Those protocols have also been greatly strengthened, with 23 new measures.

Among the changes that have been specifically incorporated to adapt to the higher prevalence are the use of three coaches rather than two to travel, in order to allow greater social distancing; more limits on personnel and “meeting points”; and that anyone who comes into contact with a squad must have tested negative.

There had been a feeling a certain complacency had crept into the game before Christmas. The task now is to shake football out of that, to prevent another suspension, and maybe an even greater shake-up of the sport than that which occurred in March.