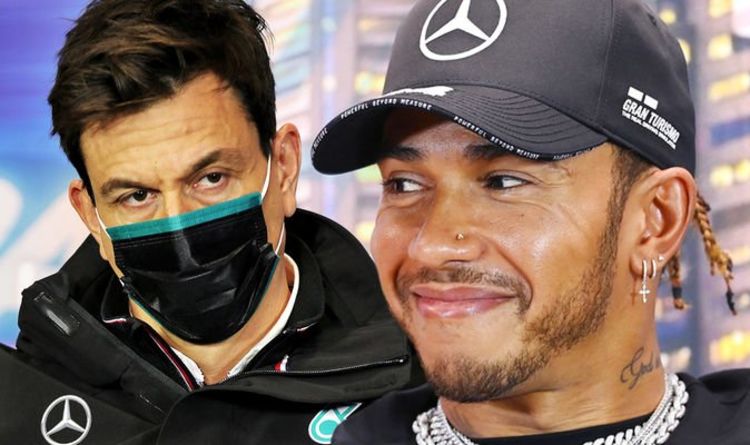 Mercedes have teased fans of an imminent update on Lewis Hamilton‘s contract situation in their latest social media post. The grid for the 2021 Formula One season remains unfinished with Hamilton still not signed up to a new contract with the reigning champions.

Both Hamilton and Toto Wolff made it clear that negotiations wouldn’t even begin until after the final race of last season in Abu Dhabi.

It means talks between Hamilton and the team have likely been ongoing for several weeks now, with no breakthrough in negotiations as of yet.

Mercedes have remained adamant that an agreement is expected to happen with pre-season testing starting at the beginning of March.

But several reports in recent weeks have suggested contract talks have been held up by several demands from Hamilton.

However, Mercedes have now hinted at a breakthrough in negotiations in their latest social media post.

In a random tweet promoting Mercedes’ F1-branded pen – valued at £9.50 – they played on the fact Hamilton is yet to sign a new deal.

“You never know when one of these might come in handy…” the tweet read, accompanied with an emoji of a winking face.

It’s unlikely that Hamilton will decide to call time on his illustrious F1 career having stated on numerous occasions last year of his desire to continue in the sport.

And he has the opportunity this season to hold the all-time record for most F1 championship wins if he takes his eighth title.

The 36-year-old is regarded as one of the greatest F1 drivers of all time and has been a huge part of Mercedes’ success over the past few years.

That could give him some leverage in regards to contract negotiations as he reportedly earned close to £40million-a-year in his previous deal.

But former F1 boss Eddie Jordan believes Hamilton’s stance at Mercedes shouldn’t give him the power to make outlandish demands in contract negotiations.

“Apparently the parties disagree on the terms,” ​​Jordan told F1 Insider. “I just heard that Lewis wants more than Mercedes is willing to pay.

“It’s also about sharing the team’s income and having an influential role in the Mercedes group.

“If I were the boss of Daimler, I would show him the door: Either you drive on our terms or you go.”