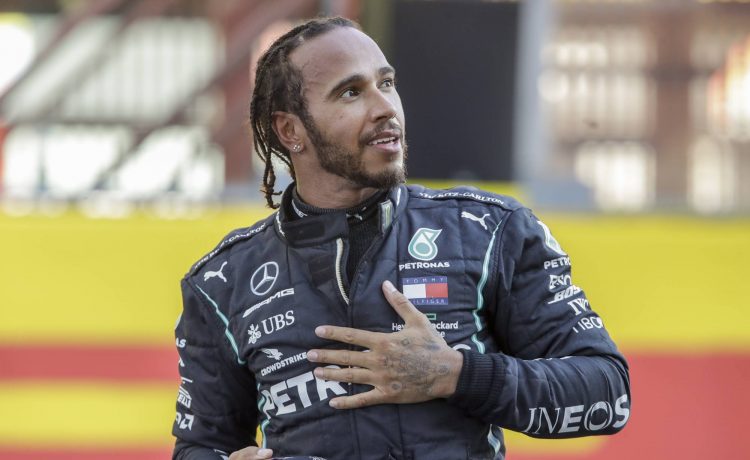 Lewis Hamilton has been defended by Ferrari driver Charles Leclerc after he became a seven-time F1 world champion. Max Verstappen has claimed that ’90 per cent’ of the field could win in the Mercedes car, something Leclerc disagrees with.

Hamilton did dominate the 2020 season and beat his team-mate Valtteri Bottas by more than 100 points.

It led to the comments from Verstappen which were perhaps underlined by George Russell’s performance when he stepped into the Mercedes after Hamilton tested positive for coronavirus.

Verstappen said of Hamilton: “I have a lot of respect for what they’ve achieved. I’m not frustrated about Lewis in a Mercedes car.

“To be honest, 90 per cent of the field could win in that car. Nothing against Lewis, he’s a great driver, but the car is so dominant.

“OK, maybe others wouldn’t be as dominant as Lewis is, but you accept the situation you are in and you just try to make the best of it.”

Leclerc thinks Hamilton’s performance in the Turkish Grand Prix underlines just how good he is and that it isn’t all about the car he drives.

“Lewis has been incredible this year,” he said.

“For me, the most impressive performance this year was Turkey because nobody expected him to be so strong.

“He won the championship with a win there, which shows that people who say it’s only the car are wrong.”

He added: “Surely he is driving with the best car but performances like this show he is the best on the grid at the moment, so congratulations to him and he has always been so consistent at the top and this can only be respected.”

Leclerc also gave an assessment on his Ferrari team and hopes for better things in 2021.

He explained: “We shouldn’t have too much high expectations, but on the other hand I feel confident it will be better than this year and I really hope so.

“We have done a good job in the last few races to tackle our issues, and I see how hard everyone is working in Maranello.

“People are just pushing at the maximum. And I hear positive things.

“You can never know until the first qualifying of the season.”

The 2021 F1 season starts with the Australian Grand Prix on Sunday, March 21.