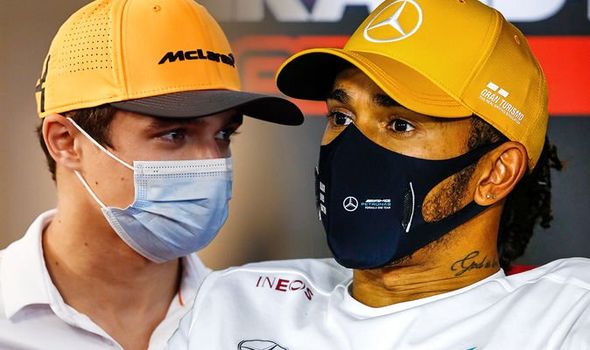 Lando Norris was heavily criticised for his controversial comments on Lewis Hamilton last year in which he claimed that the Mercedes legend “should win every race” due to his car. The McLaren driver has reflected on his growth since then, insisiting he respects his fellow countryman more than anyone else.

Lando Norris has opened up on the criticism he received after stating that Lewis Hamilton “should win every race” due to his car.

McLaren driver Norris caused a stir on social media with his comments on Hamilton after the Portuguese Grand Prix, which he later apologised for.

The 21-year-old had already slammed Max Verstappen, who he crashed with forcing him out of the race, and was clearly riled up.

Bu reflecting on his comments, Norris admits that while he always tries to be honest, perhaps he can go too far, especially when speaking about someone he respects so much, such as Hamilton.

“It was tricky,” Norris told Autosport.

“There’s no-one I probably respect more in the paddock than Lewis and what he’s done. I’ve got one podium, so it’s not like I can talk and say he’s not doing a good job, because I know how hard it is to get a podium in the first place.

“I feel like I’m a nice guy and I try to be a nice guy all of the time. But I also try to speak a bit of the truth sometimes, and say what is true, and sometimes people don’t like that.

“My comments, and my comments always within Formula 1, will never be to take anything away from a driver or disrespect what they’ve been able to achieve.

“Maybe I say some bad things sometimes, and it gets portrayed in the wrong way, or maybe I just say something I shouldn’t because I didn’t think properly.

“But it’s just because I’m a human and everyone makes mistakes sometimes.

“At the end of the day, I never mean something bad against anyone. It’s always an emotion and an outburst which every driver does.

“I’ve made mistakes now, and I’m sure I’m going to make them in the future.”

Norris is set to race for McLaren again in the 2021 season, though he will this time be joined by new partner Daniel Ricciardo who will replace Carlos Sainz.

The Brit finished ninth in last year’s world championship, and achieved his first podium at the opening race in Austria after Hamilton was handed a five-second penalty.

The 2021 Formula One season is set to kick off at the Bahrain Grand Prix on March 28.