HomeLeaguesKnicks get best of Stephen Curry in building-block win
Leagues

Knicks get best of Stephen Curry in building-block win 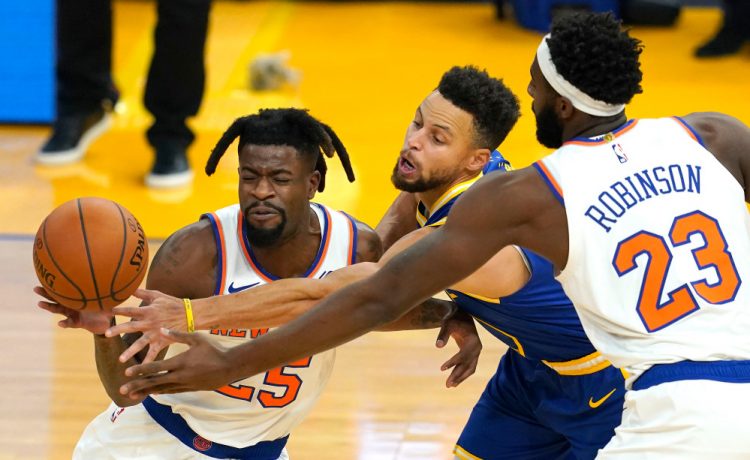 Something special is happening here.

There have not been many shining moments for the Knicks against Stephen Curry since the Warriors drafted him in 2009.

But this became one of them on a Thursday night in San Francisco, when the Tom Thibodeau Knicks train came rolling through California and reclaimed a .500 record.

The stars of the night were RJ Barrett, with his career-high 28 points, and Julius Randle, posting a near triple-double. Not Curry.

The Knicks continued to build a winning streak that’s now three games after shutting down Curry in the second half and pounding the Warriors in an exhilarating, wire-to-wire 119-104 victory.

Before this four-game Western trip began, Thibodeau said statistics that showed the Knicks as the league’s best defensive team weren’t important. The Knicks coach said he just cared about wins, and now his team has three straight blowout triumphs to hang on its trophy wall.

It still wasn’t enough for Thibodeau to bask in his team’s unexpectedly solid start.

“We got a lot of work to do,’’ Thibodeau said. “We can’t feel good. There’s things we’ve done well. We’ve had some good wins. We’ve also had games we could’ve played a lot better in. We have to be honest with ourselves and know there’s a lot of work to be done but we’re improving and doing a lot better.”

Curry has forever haunted the Knicks franchise. The Warriors’ megastar came one slot away from sliding to the eighth pick in ’09, where the Knicks awaited with open arms.

All these years later, the Knicks and their defense finally found a night to savor against Curry.

For the game’s first eight minutes, Knicks point guard Elfrid Payton held Curry scoreless. Curry got hot, notched 20 points by halftime, then they stopped him cold in the second half. He padded his stats in fourth-quarter garbage time to reach 30 points but shot just 5 of 14 from 3.

“A guy like Curry, it’s impossible to guard with one guy,’’ Thibodeau said. “I thought Elfrid did as good a job as you possibly can. What you’re trying to do is make him work as hard as you can for everything.”

Late in the third quarter, Curry coughed up the ball and Randle, who posted 16 points, 17 rebounds and nine assists, scooped it up and started a fastbreak that Barrett finished for a 12-point lead.

Barrett may be streaky, but he’s on his most scintillating hot run of his career, pounding the Warriors with relentless drives and even banging away from the 3-point line for 2 of 3 makes.

Barrett’s fastbreak bucket came off Curry’s fourth turnover — and that was the game. The Warriors scored 17 points in that third quarter and trailed 89-76 entering the final period.

In the fourth quarter, Curry was on the bench, shaking his head. Either he wanted to get back into the game on the second night of a back-to-back or he couldn’t believe his team was losing this badly to the Knicks,

The Warriors have the league’s highest payroll, the Knicks the lowest — $18 million under the salary cap. But the league’s growing defensive juggernaut kept grinding and got more strong center play from the tandem of Mitchell Robinson and Nerlens Noel (four blocks).

The Knicks also got help from the referees. Draymond Green picked up an early technical — deservedly — but a second one late in the first half that led to his ejection was a referee miscue. Green was yelling at a teammate, not the officials. Heck, the Knicks are getting the breaks.

Perhaps they are overachievers at 8-8, but their long-suffering patrons are watching this gritty team on TV. The Post has learned the Knicks are up 26 percent in viewership on MSG Network over last season at this point.

You could tell before the contest Kerr was concerned the Warriors could take the Knicks lightly. He said he was worried about his team’s “energy and emotional” state on the second leg of a back-to-back and they needed to rely on “fundamentals.’’

For the third straight game, the Knicks had the energy and another victory as the Thibodeau train chugged along. Next stop: Sacramento.