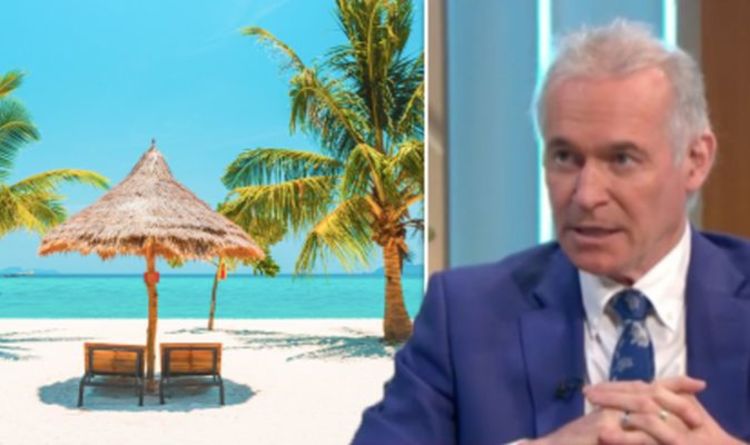 Television’s Dr Hilary served up a harsh warning to Britons who are dreaming of their summer getaways in 2021. The doctor urged hopeful holidaymakers to be “realistic” about their plans, suggesting travel might not be a possibility until the “autumn”.

Appearing on ITV’s Lorraine this morning he said: “We have got to be realistic, the vaccination process is going to take some time.

“I think people thinking about holidays this summer are barking up the wrong tree, I really do.”

Not only is the virus and subsequent vaccination programme here in the UK a key factor, but Dr Hilary also pointed out how overseas’ progress might impact British holidaymakers.

“Not just because the situation here won’t be better but because where we are going to may be lagging behind us with vaccinations and people will be nervous about going somewhere, getting stuck there, and the travel problems,” he continued.

“So I think just to be realistic, don’t set your hopes too high.

“Be realistic, set your hopes possibly for the future but probably autumn, I think September.”

A staycation may be somewhat more likely, the doctor told TV host Lorraine Kelly, however, even then he appeared hesitant to confirm their possibility with absolute certainty.

The warning comes amid the UK’s third national lockdown since the coronavirus pandemic began.

As of Monday morning, new travel rules came into practice which makes jetting off even more difficult.

Only those who are travelling for “essential” purposes are permitted to do so.

Prime Minister Boris Johnson has put a stop to all travel corridors, meaning arrivals into the UK must quarantine for a period of 10 days regardless of where they are travelling from.

They must also provide a negative coronavirus test which meets certain “specificity rules”.

Secretary of State for Transport Grant Shapps previously told Sky News: “What we are asking for instead is a sensitivity and what is called specificity – so up to a certain standard in other words.

“Those can be PCR tests or lateral flow tests, or LAMP tests, the point is there are enough of those around now to make this a workable approach to having one extra check.”

It states: “From 4am on 18 January, if you intend to travel to England, Scotland, or Wales, including UK nationals returning home from travel abroad, you must provide evidence of a negative COVID-19 test result taken up to three days before departure.

“If you do not comply (and you do not have a valid exemption) your airline or carrier may refuse you boarding and/or you may be fined on arrival.

“You must also self-isolate when you enter the UK from any foreign country except Ireland, unless you have a valid exemption.”

Despite the new regulations, one travel expert has remained hopeful holidays will begin by May.

In a Twitter post, travel expert Paul Charles predicted staycations to begin “by the end of March” and short-haul European trips “with certainty from May 1.”