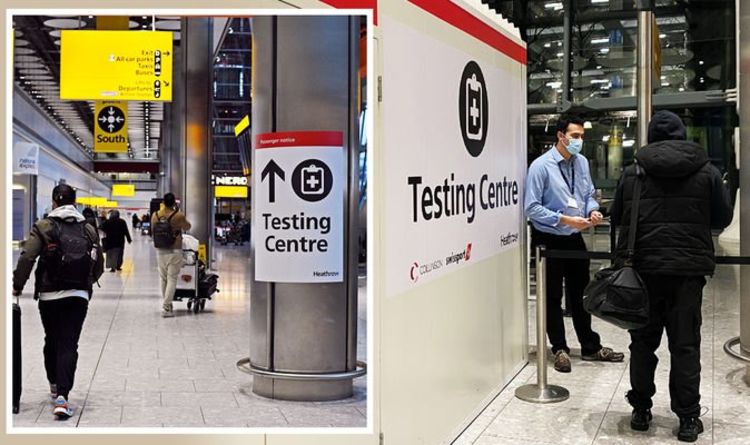 Heathrow Airport is reported to have descended into chaos on the first day of new travel restrictions which saw Prime Minister Boris Johnson putting a stop to all travel corridors. The new rule comes in tandem with the UK’s new testing requirements, which state all arrivals must present a negative COVID-19 test which must meet certain “specificity” rules.

According to reports from passengers, they are being forced to endure “painful” wait times of up to 90 minutes and some people have even been turned away from flights despite presenting negative COVID-19 tests.

Passengers flying into the airport were forced to line up and show their negative coronavirus tests to border force officials.

According to reports, Terminal Two passengers had to queue for 90 minutes.

They were also asked to show their passenger locator forms and list where they planned on quarantining for the following 10 days.

One passenger shared images on Twitter of a packed immigration hall, describing the scene as “painful”.

“Really?!? After a negative covid test, completion of the PLF and in light of a 10-day isolation…. this is the icing on the cake…. All relevant docs checked prior to boarding, why do we return to this?!?,” she wrote in a tweet.

A second user also pointed out how “packed” the airport’s arrival hall has been.

“Sort out the arrivals !! Always packed with people waiting for members of family when they can wait outside! It says do not enter still everyone enters risking all workers!” they tweeted.

A third traveller named Katrina Wilson, who was arriving into the UK from Dubai, told MailOnline: “I just thought it could have been handled better. It was quite chaotic.”

Other travellers said despite following new travel testing rules, they were turned away from their flights.

One man told MailOnline his 23-year-old daughter was banned from boarding her American Airlines service from Philadelphia via Chicago’s O’Hare airport due to land at London Heathrow despite the fact she was carrying a “valid” coronavirus test for UK entry.

Her father said: “A British American Airlines staff member was telling everyone with a rapid antigen Covid test that they weren’t valid.”

He added his daughter was in “tears”.

The UK Government has set out specific rules on the type of tests which will be required for entry.

Secretary of State for Transport Grant Shapps described the new rules as both “strict” and “specific”.

“What we are asking for instead is a sensitivity and what is called specificity – so up to a certain standard in other words,” he previously told Sky News.

“Those can be PCR tests or lateral flow tests, or LAMP tests, the point is there are enough of those around now to make this a workable approach to having one extra check.

“An extra layer of security. But as I say not the be-all and end-all.”

The Foreign, Commonwealth and Development Office (FCDO) explained: “From 4am on 18 January, if you intend to travel to England, Scotland, or Wales, including UK nationals returning home from travel abroad, you must provide evidence of a negative COVID-19 test result taken up to three days before departure.

“If you do not comply (and you do not have a valid exemption) your airline or carrier may refuse you boarding and/or you may be fined on arrival.

“You must also self-isolate when you enter the UK from any foreign country except Ireland, unless you have a valid exemption.”

As of 4am Monday morning, all travel corridors were also closed.

This means all arrivals must quarantine for 10 days regardless of where they are flying into the country from.

This can be reduced by those who opt into the “test to release” scheme, which can shorten quarantine for anyone who presents a negative COVID-19 test taken on day five of their self-isolation.

This test must be acquired privately; NHS services are not to be used as part of the scheme.