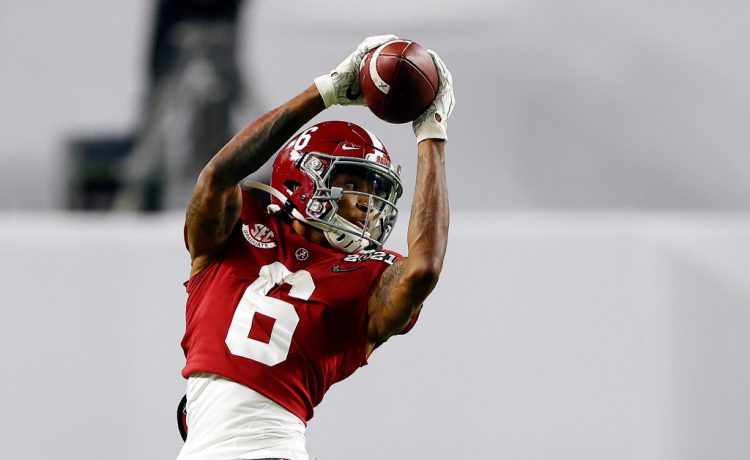 Well, this surely should give Joe Douglas something to think about, no?

Conventional wisdom says: if you can trade that pick for a haul of assets, make the call, and make the deal.

Funny thing, though: conventional wisdom doesn’t account for what we all saw Smith do Monday night, when he ransacked the Ohio State Buckeyes for 12 catches and 215 yards and three touchdowns in the first half, igniting the Crimson Tide on their way to a 52-24 thrashing that clinched the sixth Bama championship in the Nick Saban era.

Conventional wisdom doesn’t explain how Smith — who only won the Heisman Trophy last week, who was only the single-dominant force in all of college football this year — somehow running wild against Ohio State. Maybe they didn’t have a story on the Heisman winner in the Columbus Dispatch last week.

Or maybe Smith is just that good.

If you’ve watched Smith this year, if you saw him score 20 touchdowns (34 across the past two years), if you’ve seen the way he always manages to make a play, make good defenses wince, make coaches hold their breath whenever a kickoff or a punt is headed in his direction, you know how good he is.

The Heisman voters knew, giving him the big trophy even in a year when Trevor Lawrence was the sport’s fair-haired young man, and turned in a season worthy of the award. And it wasn’t especially close, Smith getting twice as many first-place votes as Lawrence and out-polling him 1,856-1,187.

So what should Douglas do?

There are a lot of years when a 2-14 season would’ve been a fast-lane path to the No. 1 pick. But the Jaguars were thoroughly uncooperative, went 1-15, and so they will draft Lawrence. If the choice is Lawrence vs. Smith then there is no choice: you go with the generational quarterback.

No. 2 is a different animal. For 10 days, it seemed the earth had shifted toward Columbus, thanks to the forever game that Ohio State quarterback Justin Fields posted against Clemson in which he completely outplayed Lawrence. There was a sense that folks who felt that way might be talking themselves into that, and Fields wasn’t overwhelming against Alabama Monday night. He could still be an excellent pro. But at No. 2?

Zach Wilson of BYU is the other buzzworthy quarterback; is he a franchise-worthy pick at No. 2? Oregon’s Penei Sewell could team with Mekhi Becton for a formidable pair of tackles (although Becton’s presence means Sewell would likely play right tackle, another position conventional wisdom would argue against at No. 2). There is no franchise-altering edge rusher.

So would it really be wandering that far outside the envelope to simply pick the best football player – or at least the best one not named Trevor Lawrence – at No. 2? Because based on his career, based on this season, based on an epic first half that stood for his night’s work after he dislocated a finger on his first target of the second half, that would sure seem to be DeVonta Smith.

Picking behind the Jets, at No. 3, are the Dolphins, Miami owning Houston’s first-round pick. It’s certainly not unthinkable that they might want to reunite Smith with his college quarterback, Tua Tagavailoa. And then the Jets would have the distinct pleasure of getting to face Smith twice a year for the foreseeable future.

Look, it wouldn’t be an easy pick for Douglas to make. He’d open himself to much the same criticism Dave Gettleman did three years ago when he took Saquon Barkley at No. 2, conventional wisdom screaming that you can find a great running back lower in the draft, often out of the first round, same as a star wideout.

But in that case, the notion was that the Giants were forfeiting a golden chance at picking a franchise quarterback. They opted to wait a year to try to fill that need, since none of the candidates bowled them over (they were probably right in the case of Sam Darnold and Josh Rosen, less so when it comes to Josh Allen and Lamar Jackson).

If there is a quarterback that captures Douglas’ fancy, and he’s 100 percent certain, that’s one thing. If a team offers a bounty of picks, by all means, that’s something to consider.

But if it’s April 29 and the Jets are pondering who the best player on the board is? We saw him Monday night. He wore No. 6 in red. He might look awfully good wearing Mark Sanchez’ old number in green.