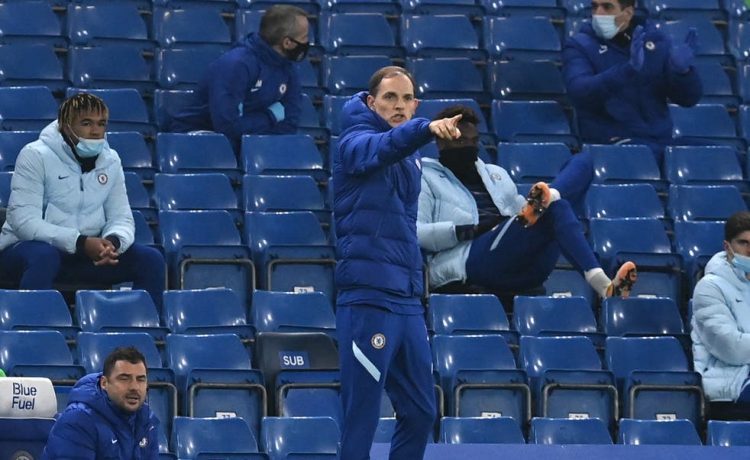 When Thomas Tuchel was asked about the “unique challenges” of preparing for his first match as Chelsea manager, he offered a uniquely Thomas Tuchel quote.

“I think the supporters would have liked what they saw,” he said of a 0-0 draw at home to Wolves. “Sixteen recoveries in the last third is proof of energy on the pitch.”

Before he’d even finished the sentence, it was impossible not to wonder how much time he’d actually spent thinking about the Chelsea crowd. It is a very learned crowd – it has to be when the hierarchy change manager so often – but it is not one that has been given to stats like that. It is instead one that has been engaged in internal culture wars, that engulfed much of the discussion around Frank Lampard, and was precipitated by the reaction to Maurizio Sarri too.

Tuchel feels a similar figure to the Italian in this regard in that he almost personifies a modern football science figure, that stands in contrast to a traditional “football man”. Some call them “technocrats” or “idealists”. Other supporters have straight out called them “nerds”. The way Tuchel speaks about football can leave some very cold.

Of course, how you speak about football is utterly irrelevant as long as your football is good – and wins. That remains the real fundamental truth of the game. You can say literally anything as long as the football convinces.

That, to be fair, is what Tuchel’s football tends to do. At its best, it is dazzling. It’s intense and exhilarating, exactly what any fan would want.

The great question is whether he is going to get the time to apply it. In that, this also has the potential to be like the Sarri situation, especially in the way the German succeeded the club’s most beloved legend.

That, to be fair, is what Tuchel’s football tends to do. At its best, it is dazzling. It’s intense and exhilarating, exactly what any fan would want.

The great question is whether he is going to get the time to apply it. In that, this also has the potential to be like the Sarri situation, especially in the way the German succeeded the club’s most beloved legend.

As with Sarri, too, it feels like “identity” is something we’re going to hear a lot of over the next few months.

It has become an even more loaded term at a club like Chelsea because of those culture wars, but also because it has been central to one of the few remaining tensions at such a wealthy club, that has been responsible for such a high turnover of managers.

That is the “identity” that Abramovich has long wanted to instil at Stamford Bridge. It has long eluded him, largely because of his own decision-making, which only deepens that dilemma. It is also at times like this where it creates a potential tension with the supporters.

“Identity” is of course a hugely broad word in that sense, taking in everything from club principles of behaviour to playing styles.

With Abramovich, though, it’s often said that he wants to recreate peak Barcelona at Chelsea. Some who know him feel that really just means a sense of spectacle – no matter what it is – and great goals.

That vagueness of definition has been reflected in the variety of manager types they’ve appointed. It’s how you can immediately go from Jose Mourinho to Antonio Conte to Sarri, even though all are so different in outlook, in a way that a club with a guiding football identity – in terms of style of play – just wouldn’t. Peak Barcelona certainly wouldn’t. The modern Bayern Munich wouldn’t.

The only identity that really matters at Chelsea is the identity from being champions. And for the vast majority of the time, it means that the aims of Abramovich happly align with the aims of the supporters.

It is at times like this, though, when a legend is sacked, that there is the potential for some tension.

Amid some of the snideness about Lampard, and fair questions about his managerial capabilities, it is easy to understand why supporters dismissed all that or reacted angrily. Every football fan first and foremost wants to just win, but wins secured by your own feel much your own, and much greater. And Lampard is – more than anyone else – Chelsea’s own. Success under him as manager would have been the ultimate. To have it taken away so abruptly naturally brings a sense of drift, maybe even pointlessness. The ultimate is gone, after too brief a spell, maybe never to return.

The fact Lampard so conspicuously played academy graduates made it all the greater. It brought that greater sense of identity. That is what identity at a football club really is. It is people who carry a lineage, a belonging. And nothing creates belonging, or identity, like bringing through home-grown players.

Lampard, for all his virtues in terms of being proper Chelsea, did not have such an identity. It was actually visible in Tuchel’s first game. It was also why there was genuine merit in what he said about recoveries.

One of the complaints about Lampard from senior players and new signings was that tactical instructions were often “baffling”, and there were times when they didn’t really know what to do in attack. There was no coherent idea.

That just cannot be said of Tuchel. Players are given ultra-specific instructions, and that could be seen against Wolves. Even the distinctive positions and runs of certain players – like Callum Hudson-Odoi in the first half – were of such obvious design.

This really is what is meant by football identity, or at least the root of it.

This is what Abramovich wants, or at least what he has been told is the best root source of a football spectacle. It’s more difficult to say whether it’s what the fans want, mostly because they’re so diverse.

A few convincing wins, however, can start to change anyone’s mind.

Consider the last time Chelsea were in such a situation. It was in 2015, when Mourinho was sacked the second time, and it all felt so much more rancorous than it does now. Some stars were being called rats.

A mere 18 months later, they were being hailed as heroes, as the crowd celebrated a league title under Conte in complete unison.

If Tuchel can deliver anything close to that, nothing else will matter. It’s just whether he can do it in time.

That’s the only quick recovery that really matters at Chelsea.