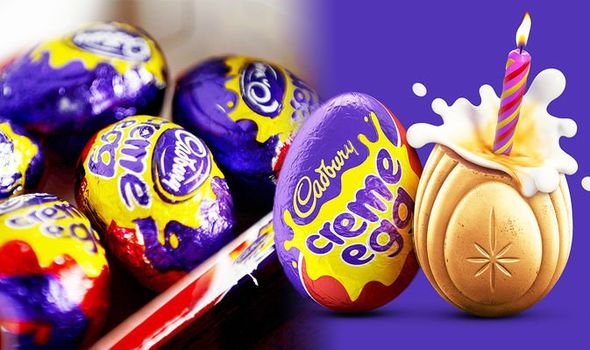 Cadbury Creme Eggs are a staple for many chocolate fans in the run up to Easter. This year, the sweet treat will give fans a chance to win up to £5,000.

Cadbury has launched lots of great sweet treats over the years.

Snacks including Dairy Milk bars, Twirls, Crunchies and Curly Wurlys are all made with Cadbury’s signature creamy chocolate.

The Creme Egg was first released as part of the collection in the UK 50-years-ago, in 1971.

The chocolate treat is only on sale between Boxing Day and Easter each year.

However, it has still managed to become a firm favourite among chocolate fans with more than 200 million eggs sold in the UK annually.

To celebrate the anniversary of its launch, Cadbury has released a brand new Golden Creme Egg.

However, it is set apart by sprinklings of edible gold dust.

How do you get one?

Those hoping to get their hands on the treat will need to act fast as it is only available for a limited time.

The golden eggs have been distributed to shops across the UK and come in the standard purple, red and yellow foil packaging.

This means shoppers will only be able to find out if they have a winning egg once it has been purchased and opened.

In total, there are 200 Golden Creme Eggs spread over all parts of the country.

Those who do discover the golden chocolates are in with a chance of winning up to £5,000.

Shoppers can discover what they have won by calling the number on the inside of the golden eggs wrapper.

They should follow the phone guidance and make sure to keep a hold of the packaging and voucher.

The promotion will run until April 4, 2021 or until all the special edition eggs are found.

This isn’t the first time Creme Eggs fans have been able to find a chocolatey surprise.

Last year, fans had the chance to win big by finding a Creme Egg made from white chocolate.

Those who discovered the limited edition version of the iconic egg were also given the chance to win a cash prize.