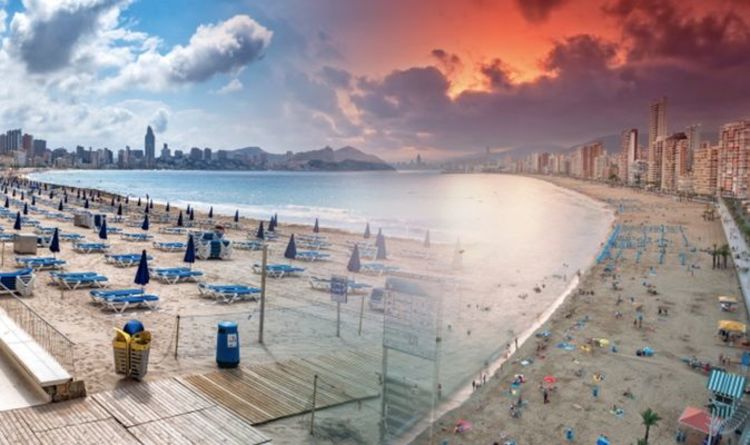 Hotels in Benidorm have made a desperate appeal for financial support after revealing that the resort, popular with British tourists, has been one of the hardest hit in the entire Valencia region. In 2019, an average of 42.7 percent of Benidorm’s tourists were from the UK.

However, amid travel bans and quarantine restrictions, this figure has dropped immensely.

The number of international travellers fell by 85 percent and overnight stays by 86.2 percent and of the hotels which did open, occupancy was only 33.4 percent, compared to 84.2 percent.

“Although it has fought hard to resist and survive this uncertain year, the tourist destination of Benidorm has been one of the hardest hit in the Valencian community,” stated Hosbec in a new report on the impact of coronavirus.

The hotel group says the situation is so bad that room prices have also been slashed.

“In order to stimulate demand, destinations such as Elche, Alicante, Valencia, Peñíscola, Castellón de la Plana or Benidorm have lowered their average prices to record differences of 35 euros compared to the previous year,” says Hosbec.

According to their latest figures, only half of Benidorm’s hotels managed to open at all in 2020 and the average number of active employees during 2020 was 2,391.

This is a drop of 56.8 percent in active employment.

The dire situation has been described as a “tourist catastrophe” with figures for the whole of Valencia showing 70 percent of hotel activity lost, more than 50 percent of employment and 42 percent of the hotel offer not been able to operate.

“The losses of the sector in the Valencian community amount to more than 700 million euros just in hotel accommodation,” says Hosbec which is calling for a rescue package of €160 million (approximately £142,014,199).

The Costa Blanca, as a whole, received 68.9 percent fewer travellers staying in hotels which meant a 77 percent reduction in hotel overnight stays throughout 2020.

The international market plummeted from more than nine million overnight stays in 2019 to just 1.4 million.

A spokesman for Hosbec said: “This rescue plan for the hotel sector should be endowed with at least €160 million (approximately £142,014,199) (financial years 2020 and 2021) for the Valencian community with a single objective: to allow survival until the health situation has been definitively stabilised and permanent national and international mobility can be resumed.

“This amount barely covers ten percent of the losses registered but can be a bottle of oxygen for the battered accounts of the companies after months and months of inactivity.

“Hotels are the fundamental element for the construction of a sustainable and modern tourist destination.

“The hotel industry is the one that provides the drag and multiplier effect of the activity as well as the one that generates a greater number of jobs with conditions of stability and progress.”

“Investing in the rescue of the hotel industry is investing in that model for the future that we all pursue and the economic effort made now will be recovered in a short time due to the driving effect of the rest of the economic activity, including the rest of the subsections that depend on it: travel agencies, active tourism, hotels and restaurants, including the second home real estate market.”

Currently, under national lockdown rules in the UK, Britons are not permitted to travel abroad for leisure reasons.

Those currently in Spain who wish to return home will face a mandatory quarantine period of 10 days.

The UK Government has also outlined tighter restrictions for those arriving back into the country, including heightened police checks on those who are supposed to be in quarantine.