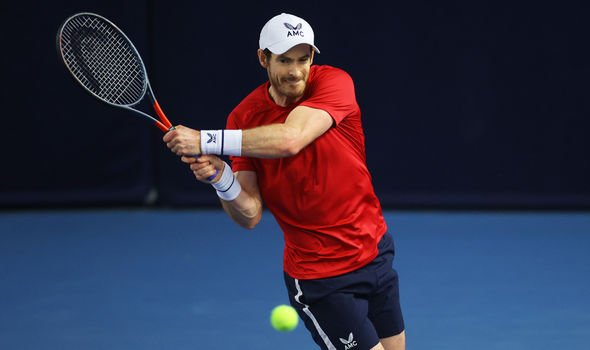 Andy Murray has abandoned plans to fly out to the United States for next week’s Delray Beach Open due to fears about the surge of COVID-19 cases in Florida. Both Murray and British No 1 Dan Evans have now pulled out of the event ahead of the Australian Open.

The British duo had both been scheduled to take part in the season-opening ATP Tour 250 Series event as they build fitness ahead of the first Grand Slam of 2021, which has been pushed back three weeks to February.

Evans however opted out pre-Christmas and has since been followed by Murray, who had been given a wildcard to join his compatriot.

But neither will now head to the US with Florida currently overwhelmed with coronavirus, having become the third US state to surpass one million confirmed cases earlier this month.

The Australian authorities are taking a strict stance towards COVID-19 tests as they bid to maintain a biosphere around the tournament.

Evans is heading straight to Australia in mid-January and Murray is now likely to join him in order to ensure they are both able to play in Melbourne.

Players could be banned from travelling and taking part in the first Slam of the year if they come into contact with anyone who tests positive for the virus.

And that has seen the trip to US deemed too risky, with Murray focused on returning to the same major where he, a year ago, indicated that he was retiring from tennis for good.

In a tearful press conference, the three-time Grand Slam champion admitted he was badly struggling with his ongoing hip injury and that it could be his last tournament ever.

A video was even made up of all the other players on tour, including the likes of Roger Federer, Rafael Nadal and Novak Djokovic, wishing Murray well in post-retirement life.

Since then, he has won the European Open and played at the French Open and US Open last year, making the second round of the latter before losing to young Canadian hotshot Felix Auger-Aliassime.

Now ranked No 122 in the world, Murray will be hoping to use the wildcard he has been handed for the Australian Open to cause a shock as he bids to get into the second week of a Slam for the first time since Wimbledon in 2017.

Australian Open tournament director Craig Tiley said of the 33-year-old’s return this week: “We welcome Andy back to Melbourne with open arms.

“As a five-time finalist he has been an integral part of so many amazing matches and storylines in the recent history of the Australian Open.

“His retirement was an emotional moment and seeing him come back, having undergone major surgery and built himself back up to get onto the Tour again, will be a highlight of AO 2021.

The former world No 1 looked sharp at the recent ‘Battle of the Brits’ event in Roehampton, where he managed to beat both Evans and Cameron Norrie, the British No 3.

He has not played competitively since the Cologne Open in October, losing to Spain’s Fernando Verdasco in Germany.

Murray will spend two weeks in quarantine before the Australian Open and will practice with Evans for his first week.

Players will only be allowed to leave their hotel once a day to practice with it expected Denis Shapovalov and Christian Garin will join Murray and Evans’ bubble in week two.

Federer, a six-time winner in Melbourne, will meanwhile take no part in the Slam with director Tiley saying the Swiss icon “ran out of time to get himself ready for the rigours of a Grand Slam”.