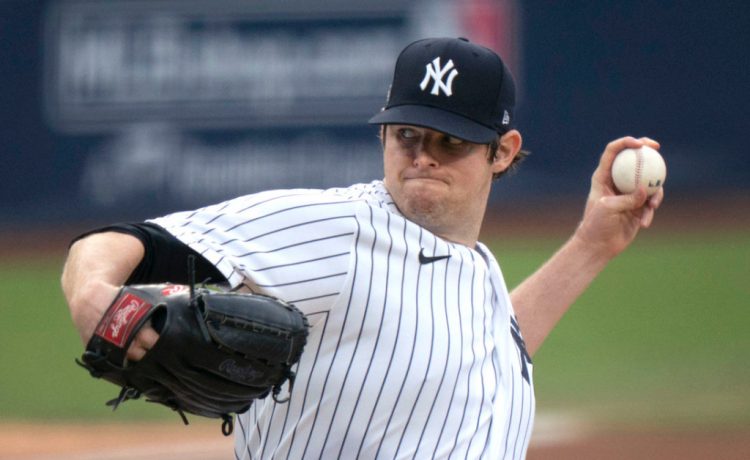 Like a tailback with a good offensive line, Jordan Montgomery can see his opening.

“I’m excited for the opportunity,” the Yankees left-hander told The Post on Thursday, before participating in a Zoom call with New York special needs student-athletes. “I’ve been working three years to get a playoff start. I’m just going to keep building off of that. I’ll be ready for it.”

Once their season ended, the Yankees saw starting pitchers J.A. Happ, James Paxton and Masahiro Tanaka become free agents, and it’s highly unlikely that the franchise, looking to cut costs after getting clobbered economically by COVID-19, will fill those voids with three veteran starting pitchers. To close that gap, they’ll look to youngsters like Deivi Garcia and Clarke Schmidt, hope Luis Severino can return from Tommy John surgery by the All-Star break and count on more from Montgomery.

Asked to assess his season, Montgomery said, “I’m pretty happy about it. If I could take two starts away [an Aug. 6 loss to the Phillies and a Sept. 2 loss to the Rays], then it would’ve been a great year. But two out of 10, I’m pretty happy with that. Something definitely to build on out of [Tommy John surgery]. I’m excited for next year.”

In his chat with about 75 special-needs students who are part of the New York State Public High School Athletic Association(they were from Sections 1, 8 and 11, all suburban counties), Montgomery identified ALDS Game 4 as the biggest outing of his career. He specifically mentioned his first-inning strikeout of Rays stud Randy Arozarena and his last matchup of the night, when he retired Kevin Kiermaier on a soft grounder to first base to strand Rays at first and second with the Yankees up by one.

“Yeah, it was definitely good to end a season on,” Montgomery said. “I would’ve liked to have two or three more starts [in the postseason], but it was a big start. I gave the team all I had for being so long since I had pitched. Gave us a chance to win and I was happy with it.”

He has been throwing off flat ground for about a month, Montgomery said, with bullpen sessions “getting pretty close.” He held a Zoom “objectives meeting” with Yankees pitching coach Matt Blake and wants to be more rigorous about keeping his mechanics in line next year.

“We picked some things out that are easy fixes for me that we think will have a big impact on my game,” he said. “That’s what my objective is this offseason, get as strong as I can, get my mechanics as smooth and locked down as I can.”

He looked pretty smooth interacting with the youngsters Thursday, smiling as he recalled growing up a Braves fan in South Carolina and announced that his fastest-ever pitch traveled 97 mph, among other tidbits.

“Jordan speaking to these kids meant so much,” said Kevin Devaney of LocalLive Networks, who hosted the event. “Most of these kids were part of Unified Sports at high schools in Westchester and Long Island, which really started last year and are now shut down. The fear is now with COVID, the schools are going to have a hard time restarting them. These kids definitely need a lift.”

“Every offseason, I try and at least go to the children’s hospital or go to the Ronald McDonald House or do something,” Montgomery said. “But COVID’s kind of put a stop to that. So I called [agent Mark Leinweaver of the Beverly Hills Sports Council] and told him I wanted to do something, so we brainstormed that Zoom calls would be a good way to talk to some kids.

“Special needs has always been something close to my heart. The Special Olympics is a great organization. In high school, I had a class that kind of paired us up with an athlete and we would practice games, train with them, getting them ready for the Special Olympics. It was tons of fun. It really made an impact on me.”

He’ll continue making this sort of impact on others, and next season, he hopes he can make even more of an impact on the Yankees’ title chances.