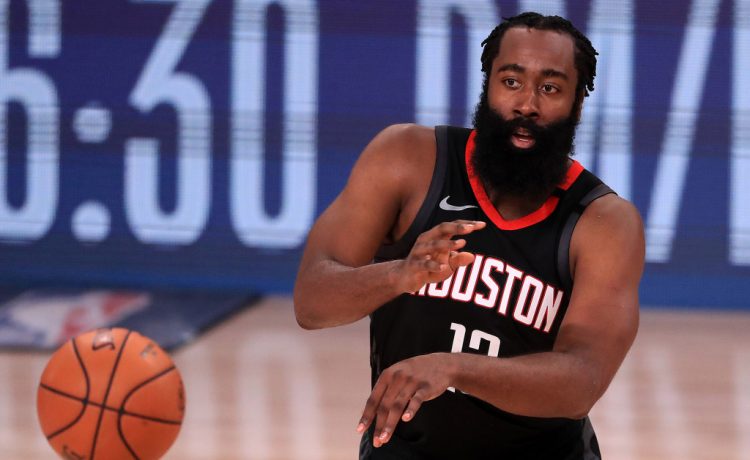 James Harden is angling to force his way out of Houston — preferably to Brooklyn — which raises a key question: Are the Nets better off with their two stars backed by impressive depth, or should they try to build a Big 3?

Harden finally arrived in camp Tuesday after telling the Rockets he would be open to being dealt to the 76ers or other contenders, according to ESPN. His first choice is believed to be joining Kevin Durant and Kyrie Irving with the Nets.

Harden finally arrived in camp Tuesday after telling the Rockets he’d be open to being dealt to the 76ers or other contenders, according to ESPN. His first choice is believed to be joining Kevin Durant and Kyrie Irving with the Nets. But does a Big 3 really trump a Big 2-plus?

“Great question because it’s almost impossible to answer,” Nets coach Steve Nash said. “Depth gives you an opportunity to support and have versatility [for] your star players.

“But a lot of it comes down to: How good is your depth? How good are the two stars versus the three stars? How is the chemistry and all of those ancillary factors that make it work or not work, allow [you] to get to the end of the road? There’s pros and cons to both.”

Most in NBA circles with whom The Post spoke felt the pros of acquiring Harden outweigh the cons for the Nets, and that it can work — as long as everybody is striving for the same goal.

Richard Jefferson, who starred with Jason Kidd and Kenyon Martin on the Nets’ teams that reached the NBA Finals in 2001 and 2002, said sacrifices will be needed whether Brooklyn lands Harden or sticks with the likes of Caris LeVert and Spencer Dinwiddie.

“You come here and have two great players, and whether you keep it with Caris and Spencer who often have the ball in their hands, if they decide to be more of a spot-up shooter and defender it’s all about the sacrifices,” said Jefferson, now a YES broadcaster. “I do believe there can be too many cooks in the kitchen, but that’s only if guys aren’t willing to sacrifice their ego.

“What’s your best chance to win? There’s only going to be two scorers. There might be a third guy here or there, and if they decide — all the rumors — to bring in a third star, that third star is going to have to sacrifice a ton. I don’t care if you’re James Harden, Bradley Beal, whoever, there’s going to be a high level of sacrifice. If you can’t get your ego out of the way, there’s too many cooks in the kitchen.”

Jefferson specifically pointed to Durant and Stephen Curry both sacrificing while they were teammates with the Warriors, and he said if a superteam adopts the selflessness often found on Team USA, “good things will happen.” Scouts who spoke with The Post agreed that adding Harden would make the Nets a favorite, albeit turning them potentially combustible on the court.

“On paper obviously that team wins the East and probably the whole thing,” Bryan Oringher, formerly a scout with the Raptors, Hawks and Wizards, told The Post. “But it all depends if they’re willing to do a Warriors-type thing and all sacrifice. [Harden’s] obviously incredible, but none of them seem super happy without the ball.”

Former 76ers scout Michael Vandegarde agreed there’s a risk in such a volatile mix, but told The Post it’s one worth taking.

“Considering where the Nets have been, the Kyrie-Durant pair is a great problem to try to figure out. The Harden-Kyrie-Durant problem would be a great problem to have as well; but I’d think long and hard about it,” Vandegarde said. “If you give it a chance and it fails, you can always trade Harden, as he should maintain his value. If you have to move Kyrie, his value will go down, and I’d never trade Durant.

“If you have three stars and no depth, you can sign older guys and guys that get bought out. … That seems easy, as vets want to be on a great team and have a last chance at a championship, so I wouldn’t be real worried about depth. The three questions for me are will those three get along, will they defer to Durant as the man in crunch time? [And] do their games complement each other?

“Three stars is much better than two stars. But the stars really need to complement each other;. I don’t think those three complement each other at all. … Kyrie thinks he’s the man always, even when he isn’t. He struggles to make others better. … I’m nervous Kyrie will not defer to Durant in crunch time like he should. Steph [Curry] was willing. I don’t think Kyrie is.

“Adding Harden would only make things worse for ‘Who is the man?’ All three of them think they’re the man, and Durant is the man.”