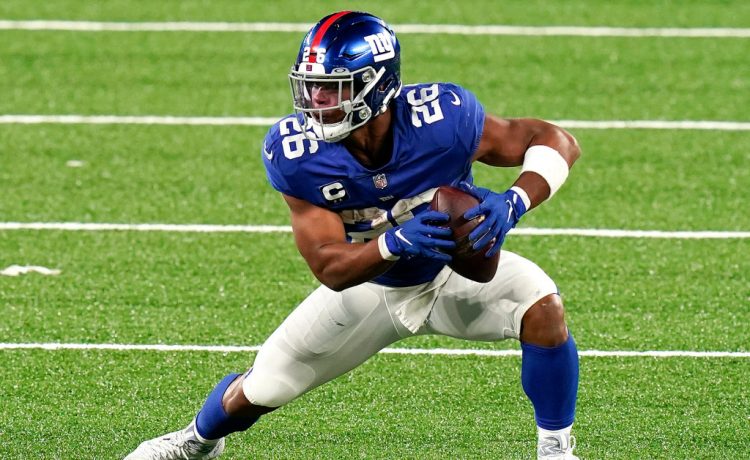 Which comes first: Saquon Barkley’s next play date or next payday?

Had this season gone as envisioned, the Giants and Barkley would’ve spent months negotiating a contract extension to make him the highest-paid running back before Kickoff 2021. Instead, an ACL tear, MCL strain and partially torn meniscus in his right knee cost him all but two games of his third NFL season — and maybe more in his bank account.

“I don’t really focus on it. Not really focused on money or anything right now,” Barkley said Thursday in his first comments about a new contract. “I’m really focusing on trying to come in every single day and get 1 percent better.”

Barkley has another year remaining on his rookie contract and the Giants could exercise control through 2023 with a fifth-year team option and a franchise tag. But the standard established by Todd Gurley, Christian McCaffrey, Ezekiel Elliott, Alvin Kamara and Dalvin Cook is for elite running backs faced with the prospect of short careers to be extended after three seasons.

An already-complicated issue became even more entangled with COVID-19, Barkley’s injury and the subsequent results.

The Giants must decide whether they believe Barkley, who missed three games with a high-ankle sprain last season, is injury-prone. If so, a major investment could devastate the salary cap. They could offer a discounted extension, but that insult might do more harm than good. Or they could make him prove he is healthy — and risk losing a chance at a bargain.

Barkley must decide if, after being introduced to the wear on a running back, he wants to settle for less than top dollar just to put more security in his pocket sooner rather than later. Or, with $34 million guaranteed from the Giants through his first four years plus north of $30 million in endorsements, if he wants to bet on his return to 1,600-yard form and bigger bucks in 2022.

Asked if he will hold out next season without a new contract, Barkley again pivoted to his rehab. He did not put a timetable on his return, but training camp seems realistic.

“Two injuries so far that happened to me are two things I can’t control,” Barkley said. “It was in the cards that way. I’m just going to continue to put my body in shape for however long I continue to play to have a successful season.”

Lost revenues from no attendance at games could drop the NFL salary cap by $20 million in 2021, which will make owners reluctant to spend. Except John Mara was reminded Thursday his team’s biggest star is a model of the Giants’ core values, as Barkley handled a lingering controversy regarding not wearing a mask out in public with teammates during the pandemic.

“I do take the virus seriously,” Barkley said. “I think that we let our guard down, to be completely honest. We were trying to do it the right way. That little moment wherever that was captured just came off negatively.

“I was really in the forefront of trying to do things, whether it was working with Campbell’s [Soup] and food banks to give food during the coronavirus. Or even if it was doing videos to help raise awareness and money for it. I truly want to say I apologize for that. As a leader of this team and being one of the faces of this franchise, I have to be better for us.”

The success of the Giants’ rushing attack over the last six games — 4.8 yards per carry from Wayne Gallman, Alfred Morris, Dion Lewis and Devonta Freeman, all of whom are pending free agents — lends credence to the analytical school of thought that backs are a dime-a-dozen and the offensive line matters most.

Then again, the Giants’ offense ranks No. 26 in the NFL in explosive plays, according to SharpFootballStats.com, and No. 30 in scoring. A game-breaker is desperately needed — and no running back has more 40-yard gains than Barkley over the last three seasons, even with games missed.

“I wish I was able to be a part of it,” Barkley said. “My mindset is I’m still part of it in a way. But to see those guys open up those holes and seeing the running backs run in a way that Wayne is running is honestly amazing.”

The Giants’ three-game winning streak has boosted the job security of general manager Dave Gettleman, the biggest proponent of Barkley’s value. Numbers and timing to be determined.

“I never viewed myself as Superman,” Barkley said. “I had an injury last year. I was able to overcome that. And I had an injury this year. This is another challenge in the way that I have to be ready to face.”