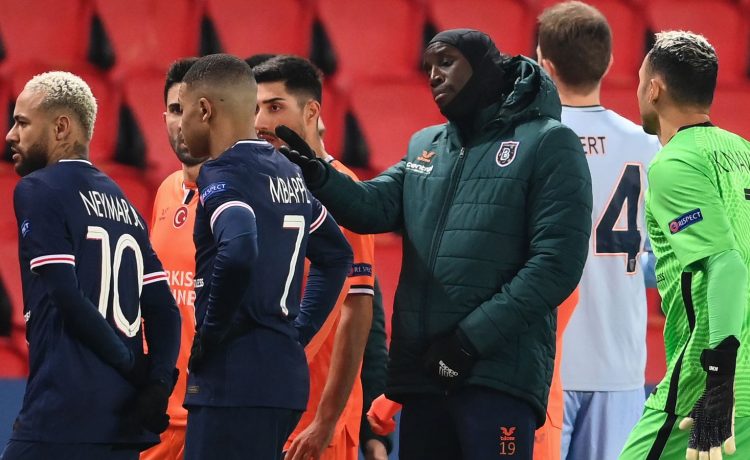 Uefa has announced it has launched an investigation after players from Paris Saint-Germain and Istanbul Basaksehir left the pitch in the 23rd minute of their Champions League fixture in the French capital following alleged racism by the fourth official, Sebastian Coltescu.

Play was immediately suspended and while an attempt was made to restart the game with a new fourth official it was ultimately abandoned after the visiting side refused to return to the pitch. The remaining minutes of the match will resume from 5.55pm GMT on Wednesday.

“Following an alleged incident involving the fourth official, the match was temporarily suspended,” read a Uefa statement. “After consultation with both teams, it was agreed that the match would restart with a different fourth official. Uefa will thoroughly investigate the matter and further communication will be made in due course.”

The walk-off occurred after Basaksehir’s Cameroonian assistant coach Pierre Webo was shown a red card in the 16th minute for protesting against a refereeing decision. That led to the Basaksehir substitute Demba Ba confronting Coltescu over what the official said as he called on the referee, Ovidiu Hategan, to dismiss Webo, which Reuters reported as being: “The black one over there. Go and check who he is. The black one over there, it’s not possible to act like that.”

In response, a clearly incensed Ba could be seen in video footage saying to Coltescu: “You never say ‘this white guy’, you say: ‘These guys’. So, listen to me, why when you mention a black guy do you have to say ‘this black guy’?”

Ba could also then be seen in footage confronting Hategan and saying to him: “Why he say negro?” There followed heated discussions before the players departed down the tunnel.

On Twitter, Basaksehir said: “Our players have taken a decision NOT TO go back on the pitch after our Assistant Coach Pierre Webo has been exposed to racist behaviour by the 4th Official.” The same account also posted the message: “NO TO RACISM Respect.”

PSG also issued a statement on Twitter: “After a red card is given by the referee to a member of opposition staff, discussions continue between players and staff of both teams with the referee. The Basaksehir players decide to go back to the locker room, the Parisians follow them.”

The show of support from PSG players was swift and decisive. The central defender Presnel Kimpembe could be seen saying: “Is he serious? We are heading in. We’re heading in. That’s it, we’re heading in,” as tensions rose. The striker Kylian Mbappé posted on Twitter: “SAY NO TO RACISM. M WEBO WE ARE WITH YOU”.

Players walking off the pitch in protest against racism is rare and that those both teams did so was especially striking. It could also prove a turning point in football’s fight against discrimination and there will be much focus on Uefa’s investigation and the sanctions the governing body issues should Coltescu be found guilty of racism.

Tayyip Erdogan, Turkey’s president, said on Twitter on Tuesday night: “We are unconditionally against racism and discrimination in sports and in all areas of life.”

Regardless of the result in the rearranged game on Wednesday evening, Thomas Tuchel’s side have qualified for the knockout stages of the Champions League following Manchester United’s 3-2 defeat against RB Leipzig.

PSG have nine points, the same amount as United, and even if they remain on that after what will be their final Group H fixture the French champions will progress on the back of having a better head-to-head record.

A victory against Basaksehir would enable PSG to leapfrog Leipzig and progress to the last 16 as group winners.