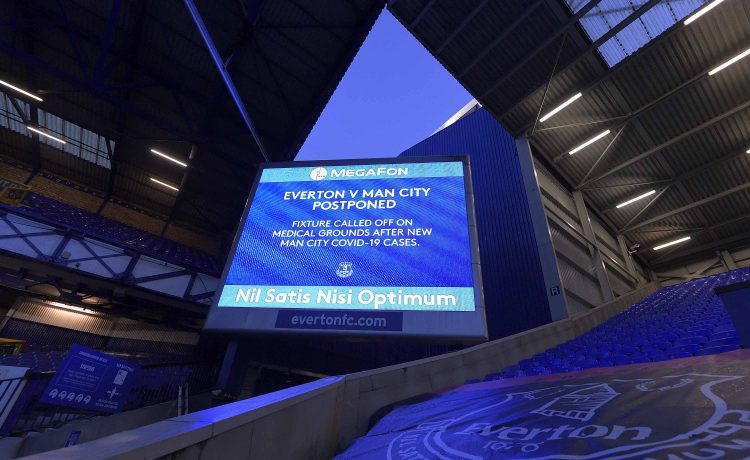 LIVERPOOL, ENGLAND - DECEMBER 28: A big screen graphic announcing the fixture being called off before the expected Premier League match between Everton and Manchester City at Goodison Park on December 28 2020 in Liverpool, England. (Photo by Tony McArdle/Everton FC via Getty Images)

The Premier League recorded 18 positive Covid-19 tests during the week over Christmas, the highest number since testing began earlier in the year.

The figures, which were recorded between 21 and 27 December from 1,479 overall tests and included four positive results among Manchester City’s playing squad and staff, will cause significant alarm given it is a considerable rise on the previous week’s tally of seven.

It is the highest number recorded over a single round of testing since the Premier League first began testing under ‘Project Restart’ in June, with the previous highest of 16 coming between 9 and 15 November – a result produced from 1,207 tests.

The tally also comes as the UK posted its highest daily rise in coronavirus cases on Monday since the pandemic began, with 41,385 new Covid cases and 357 deaths recorded at the start of the week.

City’s trip to Everton on Monday night was forced to be postponed just hours before kick-off after an outbreak among their squad worsened. Both Gabriel Jesis and Kyle Walker were among four club personnel who tested positive for Covid on Christmas Day, but further positives were recorded on Monday morning and the Premier League elected to call off the Goodison Park encounter on safety grounds.

Those additional test results from Monday are not factored into the 18 positives recorded last week, meaning that 14 others were recorded across the 19 remaining Premier League clubs.

The Premier League does not reveal the identities of players or clubs on privacy grounds, although Arsenal confirmed on Monday that defender Gabriel Magalhaes has also tested positive for coronavirus and, like Jesus and Walker, is currently self-isolating in accordance with UK guidelines.

A Premier League statement read: “The Premier League can today confirm that between Monday 21 December and Sunday 27 December, 1,479 players and club staff were tested for Covid-19. Of these, there were 18 new positive tests.

“Players or club staff who have tested positive will self-isolate for a period of 10 days.

“The Premier League is providing this aggregated information for the purposes of competition integrity and transparency. No specific details as to clubs or individuals will be provided by the League and results will be made public after each round of testing.”